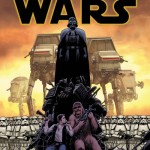 THE GREATEST SPACE ADVENTURE OF ALL TIME CONTINUES! The Rebel assault on Cymoon 1 continues! Luke Skywalker – cornered by Darth Vader! Han, Leia, and the others – trapped!

My review of Marvel’s Star Wars #1 was not the A++ that some other reviews gave it. Don’t get me wrong, I liked the swing. But it felt more like a base hit than a home run.

To continue with my baseball metaphor, Star Wars number #2 feels like triple. It’s enough to get excited about, but doesn’t quite score a run. And yes, the anticipation for the next batter is high.

Okay, enough with the sports talk! Lets get to some thoughts on the writing. Jason Aaron does a fantastic job of making this a non-stop edge of your seat issue. Han and Leia are doing their part of the action, which is awesome, but the real focus is on the interactions of Darth Vader and Luke Skywalker.

This is Vader and Luke’s first meeting since the Battle of Yavin, and since that was a space dogfight, that makes this their first face to face meeting. Vader is searching for the pilot who destroyed the Death Star, and he finds a young farm boy from the outer rim territories in possession of a familiar weapon. The focus here is on farm boy, because that is who Luke is at this point. He’s has minimal training from Obi-Wan and he’s trying to take on a Dark Lord of the Sith, the snowball in Hell had a better chance.

Aaron does a fantastic job of making this feel like Star Wars. Much like A New Hope, Luke is impulsive, rash, and has a shoot first think later action plan.  Through all that, The Force has a way of teaching Luke lessons and providing him what he needs. He may be a farm boy, but he can still bullseye womprats like nobody’s business.

Luke isn’t the only star of the book. Seeing Han hijack an AT-AT with no working weapons and take it on the offensive is a site to behold.  The way Aaron writes the dialog between Han and Leia is spot on perfect. There is no stretch of the imagination to hear the voices of Carrie Fisher and Harrison Ford in your head. The very same goes for Vader. James Earl Jones voice is solidly in your ear as he makes statements about the end of our heroes. Beyond the voice of Vader, we are treated to see how much of a bad ass he is. Merciless and cruel, Darth Vader shows that he has no regard for life as he cuts down any and all who stand in his way.

Now for room to grow. I have stated this more that once, but Darth Vader is the most difficult character to draw in comic books. Cassaday does his best to make Vader seem menacing, especially when using the Force to change the entire landscape. Vader himself on the other hand looks like he’s a cross-country runner in black leather. I didn’t get the feeling of impending doom by his physical presence. Some may say this is a minor detail, but it took me completely out of the story. Lastly, is a problem that has been developing in comics for some time. With these major properties that are striving to be epic on every level, you don’t get too much forward movement story-wise in one issue. There are huge splash pages with limited dialog, and in a standard sized comic book that is prime real estate.

Overall, Marvel’s Star Wars on it’s way down the right track. Now we see how their other Star Wars books fare.