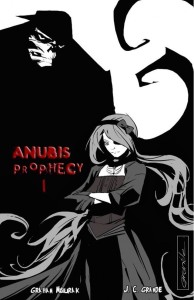 Anubis Prophecy Volume 1: Mischa
A contemporary gothic tale about a young necromancer who is the catalyst to a war between ancient gods and humanity.
http://www.duskleaf.com/
——–

Here’s a nifty little title that has more going for it than you might think (then again, I’ve just come off of the blaring disappointment that was Jupiter Ascending, so my opinion might be a little skewed…).

The short blurb from the publisher really doesn’t do this story justice. In the first installment, we’re introduced to young Mischa, the aforementioned “young necromancer”. Her powers over the dead, being able to animate a corpse through her blood, set her apart from the living. It seems that her closest companion is her undead thrall, Celsus, a hulking and possibly decomposing zombie whose primary purpose is to act as Mischa’s bodyguard. But the two have a relationship that goes a little farther than that, and I think that part of it comes down to Mischa being able to relate better to the dead than she can with the living. Even her uncle Raphael, the man who raised her after her parents died, doesn’t quite seem to “get her”. For that matter, Celsus doesn’t seem too fond of Uncle Raphael either.

For sure, the book has some issues… In particular, Uncle Raphael’s horrendous French accent comes to mind. Now, this might sound a little petty, or nitpicky, but it just seemed like the constant use of “eet” and “ave” (“it” and “have”) sorta took me out of the story. I think if Raphael’s Frenchness (it’s a word… I made it up) could have been left with the occasional “mon ami” or “ma chere”, the point could have been made and the dialogue wouldn’t have suffered.

My personal accent issues aside, I still really liked this book. There’s some great dialogue, particularly between Mischa and Celsus, and a great reference to “Scanners”. Any comic that can work in a reference to a really bad yet classic old sci fi movie is okay by me. For a “contemporary gothic” story that has some manga influences in both art and dialogue, this one hit the mark with me.

I don’t know art, but I know what I like. 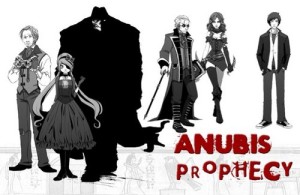