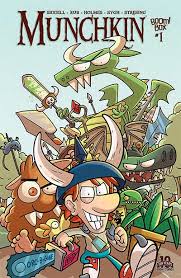 Munchkin #1 (BOOM!)
Based on the immensely popular card game, Munchkin comes to comics! Munchkin takes place in a very flexible mashup of genres. Originally a satire of fantasy roleplaying, it has since then taken on non-fantasy and non-gaming elements. Characters in Munchkin change constantly but never permanently. What do Munchkins do? They play for the win. They are rules lawyers. They backstab. They gloat. They whine when someone else backstabs or gloats. Munchkins are emotional. Munchkins may be clever, but they are never wise. Munchkins have short attention spans. Munchkins may be brave in the face of awful odds, but they are even braver when beating up crippled goblins for their lunch money. If a Munchkin seems to show mercy, it’s because he was bored or distracted. After all, even stomping an ant helps you level up.
——–

A quick and easy to read book, this one comes across as a tongue-firmly-in-cheek advertisement for the popular card game . I haven’t played the game, but I know that it’s popular because my friends keep telling me, “Dude, you have to play this game! It’s very popular!” As a comic, the book is broken up into short chapters that have nothing at all to do with each other. There’s no “world building” involved here. Just a lot of wit, and not much wisdom… and if you’re looking for mindless escapism, isn’t that really what it’s all about?

The artwork is quirky and stylish in its own way, most of the characters looking like they came out of a comic strip. No, I don’t think we’ll see Jim Lee or Todd MacFarlane doing much guest work on this one. I really wish I could say more about the book, but I’m finding myself wanting to go and pick up the card game. Huh… I guess the book did its job. Give it a read. It’s a hoot. 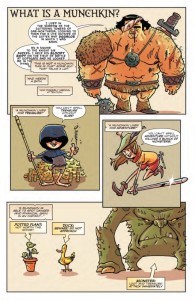 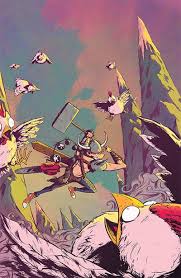 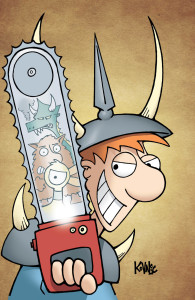