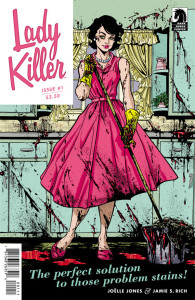 In a different, less violent world where murder for hire wasn’t a lucrative business, Josie Schuller could have been the mom on Leave it to Beaver. Instead, she’d be more at home in a Quentin Tarantino movie. Which works, cuz I happen to like Tarantino movies.

I don’t think I’ve seen a more radical swing in the “double life” plot device. The book opens up with Josie smack in the middle of a job, taking out a mark in a spectacular fashion that includes a hammer and a butcher knife. As soon as that’s done, she’s at home looking perfectly in tune as the quintessential domestic goddess. The snapshot of her home life is right out of the fifties, complete with precious and precocious twin girls, a workaday husband pulled right out of “Mad Men”, and a hostile German speaking mother-in-law who obviously doesn’t think Josie is good enough for her son. The first issue builds us up to the surprise visit from a mysterious stranger, a part of Josie’s other life who shows up at her doorstep with a job offer.

It’s obvious that Josie isn’t happy with her worlds getting so close together, so there’s the hint of character development that involves more than hired homicide. We can only assume at this point, that Josie truly is devoted to her family (or she’d off the mother-in-law and be done with her) and wants nothing more than to keep her secret life as far away from them as possible. Too bad for Josie, but that would make a really boring read.

This one looks like it’s gonna bring enough twists for the most jaded of readers, but will bring with it more than a two dimensional killfest.