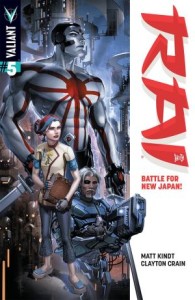 Rai #5 (Valiant – Kindt / Crain)
The year is 4001 A.D. – led by the artificial intelligence called “Father,” the island nation of Japan has expanded out of the Pacific and into geosynchronous orbit with the ravaged Earth below. With billions to feed and protect, it has fallen to one solitary guardian to enforce the law of Father’s empire – the mysterious folk hero known as Rai. They say he can appear out of nowhere. They say he is a spirit…the ghost of Japan. But when the first murder in a thousand years threatens to topple Father’s benevolent reign, Rai will be forced to confront the true face of a nation transformed…and his own long-lost humanity…

Back when Valiant comics first started coming out, I really didn’t get into them. They had interesting titles, some kinda cool looking characters and storylines, but it didn’t work for me. This current run of Valiant titles, many of them rebooted from the ground up, have been right on the mark! Rai is no different.

Anyone with a love of the cyberpunk genre should be able to slip right into this high tech “New Japan” setting. It melds the concepts and principals of Japanese society with an extremely “Orwellian” concept. Instead of “Big Brother”, we have Father, a self aware artificial intelligence tasked with keeping New Japan safe. The conflicts start coming fast and serious when it becomes a little more difficult to live with what an all-powerful and all-knowing sentient being would consider as “safe”.

Rai #5 starts us out on a new story arc. New readers are given enough background on the existing characters that they shouldn’t have much trouble jumping aboard. And let’s face it… this is only issue 5. If you’re really feeling left behind, that’s only four back issues you’d have to pick up. So go on, give it a shot. Tell me what you think.