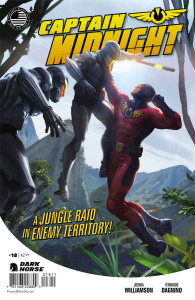 Captain Midnight #18 (Dark Horse – Williamson / Dagnino / Mena / Broussard)
With teleporting assassin Helios on a tight leash, Captain Midnight and his allies soar south to infiltrate an impenetrable jungle compound and attempt to capture Midnight’s sidekick turned enemy, Chuck Ramsey, and force him to answer for his crimes. But what traps lie waiting in the undergrowth? And what mysterious forces is Chuck tapping into?

Reading Captain Midnight reminds me of the old school pulp comics like Doc Savage. Mix in a little Captain America, and this is one of the titles where the good guys are Good, and the bad guys are straight up, no shades of gray, capital “E”-Vil. You don’t really have to worry about things like moral ambiguity, because Captain Midnight is on our side, and he always wins. He’s Captain-friggin-Midnight!

Here we have a story that’s culminating in a classic showdown… In one corner we have our hero. In the other, we have the penultimate bad guy, trusty sidekick turned megalomaniac, Chuck. No, seriously… that’s his name. Chuck Ramsey, formerly sidekick to Captain Midnight before the Captain was pulled through a rift in time to our present. Chuck was left behind to ponder all of the wrongs he could right, and like all really good badguys (think guys like Darth Vader and Magneto) he’s come to the conclusion that the only way to truly help the world is to bring it to its knees. Face it, the best villains have always had the best intentions… at least in the beginning.

And here we are… Midnight is faced with the terrible decision, and has decided “No more!” There’s been enough suffering at the hands of Chuck (come on, dude… get a codename…), and for to save innocent lives, Midnight will bring his old friend down or die trying.