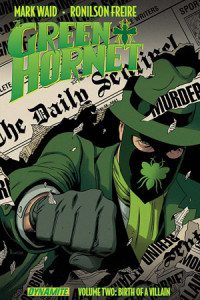 MARK WAID’S THE GREEN HORNET VOL. 2: BIRTH OF A VILLAIN TPB
Rating: Teen +
Cover: Paolo Rivera
Writer: Mark Waid
Art: Ronilson Freire
Publication Date: Nov 2014
Format: Softcover
Page Count: 192 pages
ON SALE DATE: November 26
Masquerading as a costumed crime lord, the Green Hornet establishes a criminal network to weed out the most wicked among their ranks. But his actions have not gone unnoticed, and J. Edgar Hoover has declared him Public Enemy Number One! Targeted by the law and gangster rivals, not even Britt Reid’s fortune can buy Hornet and Kato out of this fix. Superstar writer Mark Waid (Kingdom Come, Daredevil) concludes the epic story of Green Hornet’s battle against his worst enemy: himself!

So there I was, looking through the goody basket from Dynamite, and a see a bunch of previews for upcoming trade paperbacks. I wish I could say that I was too much a purist to fall for the lure of single volumes collecting multiple issues in a series, but I’m not. Love trades! Over the years, I’ve accumulated so many single issues that I just don’t have the time or patience to keep them organized. Don’t judge.

It also shouldn’t come as too big a shock, for anyone paying attention to my ramblings, that I’m a huge fan of the old pulp heroes. The settings, the tones, the larger than life villains with no hint of gray area to be seen… These are the stories that started it all. Many of today’s popular characters wouldn’t exist without these humble beginnings, and I’m glad that Mark Waid is doing some justice to the source material.

No, I didn’t care for the debacle that was the Green Hornet movie. Not at all. The Hornet isn’t a stooge. Come on, he’s the epitome of the anti-hero, and it was a slap in the face that they made him out to be some knuckle dragging moron that Kato had to carry along.

But this… THIS is the Green Hornet that new fans should get to know. The guy who’s out there playing the ragged edge between the police and the underworld criminals, all who believe that the Hornet is an evil mastermind. The carefully crafted cover is what allows the Hornet and Kato… no sidekick here, but a partner in the war against crime… to work in the shadows to take down the badguys from within.

Waid does a fantastic job of capturing the tone of the old stories, and ramping up the stakes to make an impact on a more jaded audience. Please, if you’re going to dig into the Green Hornet, don’t do with that movie. Ignore the movie. Take a plunge and dig into the stories the way they were meant to be told, dark and gritty with a touch of old-school flavoring.