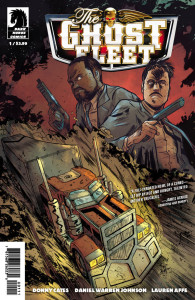 For the world’s most valuable, dangerous, or secretive cargo, you don’t call just any trucking service . . . You call THE GHOST FLEET. When one of the world’s most elite combat-trained truckers takes a forbidden peek at his payload, he uncovers a conspiracy that will change his life forever! A new series of badass action on the open road begins here!

* From the critically acclaimed writer of Buzzkill!

Trace and Ward are partners. This first issue introduces us to the two as they’re driving a chase vehicle alongside one gi-hugic semi, hauling super double top secret cargo. When their small convoy is attacked, the action is fast, violent, and intense. This is the comic book the Road Warrior would read when he wanted some inspiration, when he wishes he could be badass…

Okay, that might be going a little thick, but this is a new title that got me a little excited. I’m kind of an action guy… Love action. Movies, books, comics, it’s all kind of my thing. So when I get a peek at a story that gives me the action I crave, and does it with great writing and three dimensional characters, I get a little excitable. This issue did all of that for me. At first I wasn’t sure how I was going to take to this book. It starts out with a tease, then gives us a few pages of dialogue as we’re introduced to our characters.

And then comes the twist. There’s a sudden but inevitable betrayal. There are stunning heroics. Explosions. A rocket launcher. A mysterious cargo. All Hell breaks loose, and doesn’t stop until the last panel. Take a look at this new series from the start, keep the pedal to the metal and hang on…