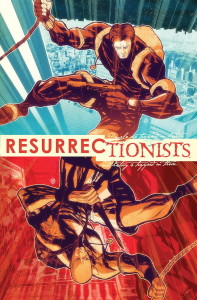 Are you near-death experienced? Framed architect-turned-thief Jericho Way has discovered he’s a Resurrectionist, one of a select group of people who can not only remember their past lives, but become them. Two groups are now after his services—the Sojourn corporation, which wants to exploit his powers for mysterious purposes, and a motley crew of modern-day tomb robbers who have been trying to pull the same impossible heist for 3,000 years—and if Jericho joins them, he may steal back his own future!
* A new creator-owned ongoing comic series.
* Art by rising stars Maurizio Rosenzweig (Clown Fatale) and Moreno Dinisio (Dead Body Road)!
* CBLDF member retailer exclusive, contact the CBLDF for more info on the Jenny Frison benefit variant!

This is one of those comics that could go in a couple different directions. We could get the heavy handed attempt at the hardcore crime noir. It could present as an overly camped up version of Highlander or Five Ghosts. It might even turn out to be just another attempt at a high concept without execution or depth.

Thankfully, the first issue doesn’t show up with any of those problems. At first I wasn’t sure how I was going to feel about the artwork, but as the book moved along I saw that it fit the story and flowed with the narrative. I also had early doubts as to the pace… the story jumps in with no preamble or attempts at establishing what’s going on, but the opening pages were just a taste of what was coming. Once we’re introduced to our main character, Jericho Way, we start to see how the book could actually play itself out.

Way shows up as a solid character with a past… Seriously, in a past life he was the Master Builder for the pyramid of Herihor, high priest of Amun-Ra. This past starts pushing its way into his current life, giving him vivid glimpses of events that are eerily parallel to the here and now. This bodes poorly for Way, who has been hired to orchestrate a heist, when Herihor’s men begin executing everyone involved in the building of the pyramid, to preserve its secrets.

The book gives us some interesting character work. There don’t seem to be many “throw away” or filler characters, and everyone is written with personality. Also, the writing isn’t too heavy-handed, giving us some good humor beats to keep the pace quick and the reading easy. While there are some dark themes in the story, there are enough chuckles to relieve the pressure and keep the mood from taking a nose dive.

Dark Horse has a good prospect here in this new series.