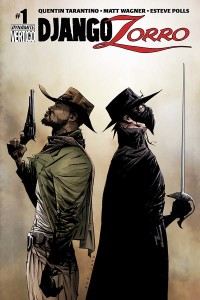 Set several years after the events of Django Unchained, Django/Zorro #1 finds Django again pursuing the evil that men do in his role as a bounty hunter. Since there’s a warrant on his head back east, he’s mainly been plying his trade in the western states. After safely settling his wife, Broomhilda, near Chicago, he’s again taken to the road, sending her funds whenever he completes a job. It’s by sheer chance that he encounters the aged and sophisticated Diego de la Vega – the famed Zorro – and soon finds himself fascinated by this unusual character, the first wealthy white man he’s ever met who seems totally unconcerned with the color of Django’s skin… and who can hold his own in a fight. He hires on as Diego’s “bodyguard” for one adventure and is soon drawn into a fight to free the local indigenous people from a brutal servitude, discovering that slavery isn’t exclusive to black folks. In the course of this adventure, he learns much from the older man (much like King Schultz) and, on several occasions, even dons the mask and the whip… of The Fox!

I don’t know if anyone’s actually been paying attention to my blabbering here, but on the off chance that you have, you know that I have a “thing” for the old school action heroes. For the record, Zorro is one of the first to get my attention. One of my favorite old movies is “The Mark of Zorro“, starring Tyrone Power and Basil Rathbone (trivia fact, according to certain continuity, this was the movie Thomas and Martha Wayne took young Bruce to see on the night they were killed…). Over the years, I’ve probably seen every Zorro movie there was, even the ones that weren’t all that great.

And Matt Wagner. So right there, we have three things that could pull in the hat trick for me, as a comic reader and fan.

Crap, I liked “Django Unchained” too. Okay, I guess I’m in.

Seriously, I’m in. I read the first book, and as an introductory issue it’s a keeper. The idea that Tarantino is on board as more than a “creative consultant” is a huge bonus. The great character play that he brings to his movies should translate well into the comics, and Matt Wagner brings his A-game to everything he does. Before I start sounding like too much of a fanboy, I’m going to throw in one reservation: Historically, movies brought into comics have tended gimmicky attempts to cash in on the name recognition, so I’ll keep my fingers crossed in the hopes that this doesn’t happen here. I’m optimistic so far, as the writing seems to be taking the material pretty seriously, and the elements that make the characters great are all in place.