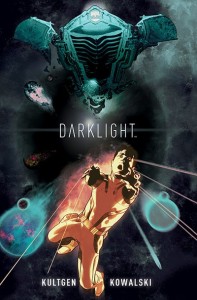 Darklight (BOOM! – Kultgen / Kowalski)
We poisoned our planet. Sucked it dry of natural resources. Killed one another in the name of gods that never existed… And survived despite it all.

Now, at the very edges of the fabric of space-time, the universe itself is starting to decay. Three warring races- the Human Empire, the organic Duron, and the cybernetic Luminids- must band together to stop their mutual destruction, leaving the future of the galaxy in the hands of Captain Rhodes and the crew of the H.E. Woden.

From New York Times bestselling author Chad Kultgen (The Average American Male; Men, Women, and Children) and critically acclaimed artist Piotr Kowalski (Marvel Knights: Hulk) comes a sci-fi epic that is truly one of a kind.
——–
Okay, I’m not actually “previewing” anything, cuz the book came out already, but so far as I know it isn’t an ongoing series so it’s not like I’m really behind anything…. Follow? Okay. Read on.

Fans of epic, galaxy sprawling science fiction should really check this title out. In this collected edition, we have four chapters that chronicle the end of our universe, and the fight to hold on to every last inch while it lasts. The crew of the H.E. Woden know that no matter how many “all or nothing” missions they may have taken on in the past, this one really puts the ideal to the test.

For the most part, the biggest problem with this story is that it was rushed, and I never really got the full idea of scope to a story that spans the galaxy. I would have loved to see Darklight given a truly epic treatment, spanning a much larger run than what we’re given here. This could have been a great “maxi-series”, running a twelve issue span to really give the story a chance to stretch out to its potential, and give us a better chance to follow the characters through their arcs as they developed.

The work that goes into creating a cohesive universe, complete with distinctive warring alien species, is a labor of love. I can’t imagine going to the effort unless you were determined to produce something solid and noteworthy. In this story, we’re given a look at three very different factions: The humans (that would be us), determined to survive at all costs, clutching to any chance at continuing the existence of all things and ignoring the odds to get the job done; The Duron, masters of genetic manipulation and cloning, are able to craft their race to fit any need at any time; The Luminids, who have devoted themselves to a technological ideal that has enabled them to grasp virtual immortality in the communal Datastream, but left them with no real concept of the individual.

This is what good science fiction is supposed to be… a reflection of our goals, giving us a possible glimpse into the direction we’re going. As we make our own advances in the different fields of science, our reach extending by leaps and bounds, at some point we’ll have to decide how far is just enough. Darklight is a good story that gave me just enough, and left me wishing it had gone further.