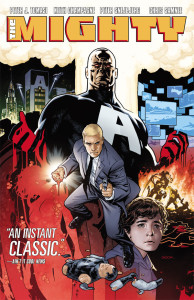 The Mighty (TPB) (Dark Horse – Tomasi / Champagne / Samnee  / Snejbjerg)
As the world’s only superhero, Alpha One has become an icon of hope in uncertain times. But while the population is inspired by their savior from a distance, the police captain, Gabriel Cole, has gotten close enough to discover that Alpha One’s plans for a utopia are more radical than anyone suspects.

———-
Every once in a while, you run across a book (novel, comic book, whatever) that really grabs hold and takes you for all you’re worth. I don’t think I’m overstating things here, when I say that if you read no other superhero book, read this one. It’s a game changer.

Think about it… Haven’t you ever wondered how Superman’s kept that all-American boy from Kansas attitude? I mean, he can fly. Bullets don’t even make a dimple in his skin. He flies through space and looks down on the Earth from on high… higher than the gods of Olympus could lay claim to. Nothing that happens here on Earth can really touch him, yet throughout the years he’s still the same guy with the same ideals, the same moral compass.

How is that possible?

If we are the end result of our life experiences, always changing, always growing no matter how old we get, don’t you wonder what would really take to make Superman sit up and take notice? Let’s move past the idea of “perceived level of threat”, beyond the idea that we react to situations in a manner in keeping with how they impact us directly… In the case of a true “Man of Steel”, you’d be looking at a person who wouldn’t get out of bed for anything less than a thermonuclear detonation. Hell, he’d probably hit the snooze button once or twice before he bothered.

Well, meet Alpha One. He’s got all the bells and whistles, everything a superman would need to earn the title, and he’s out there right now, determining the fate of the world. His one real connection to the rest of the world is Gabriel Cole, his liaison and solid right hand, acting as the buffer between the world and Alpha. Cole’s devotion runs deep, all the way back to his childhood when his parents were killed in a fiery car crash, and Alpha One pulled him from the wreckage in the nick of time. From that incredibly random occurrence, these two men were fated to become best friends. Chums, partnered together in the mission to make the world a better place. Sounds perfect, doesn’t it?