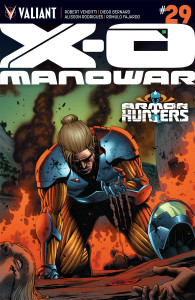 Broken kingdom!  The world has changed for Aric of Dacia – the armored earthbound hero known as X-O Manowar. Unable to protect his friends and allies from the interstellar hunters sworn to kill him, the Visigoth warrior who would be king now recoils from the horrendous consequences – even as a threatening new future looms. Everything changes now!

I remember when Valiant first started out… I had friends who jumped on board and insisted that everything not-Valiant was garbage.  I gave some of their titles a look, X-O being one, and I have to say that I wasn’t really impressed at the time.  Now I’ve been taking a new look at Valiant’s titles, and I have to say that I’m not sure what changed, but this is some great writing.

X-O Manowar #29 brings us into the devastation of the Armor Hunters, and in the aftermath our  hero Aric isn’t given any time to sit back and enjoy a lull.  There are conspiracies afoot, and with the Unity team (Valiant’s very own super team) off doing their individual things, it’s up to Aric of Dacia and the “Lady Colonel “in charge of the extraterrestrial monitoring agency, M.E.R.O. to get it done.

It looks like someone inside M.E.R.O. is looking to make some money off of acquiring another suit of X-O armor, and he’s willing to betray everything he’s done to get it.  His target is the captive armor infected being called Malgam.  His plan is to use Malgam’s infection to produce a full suit of armor for the highest bidder.

The writing on this book is great, not dumbed down, and with no overly cheesy lines… at least nothing that a Visigoth warrior from the fifth century wouldn’t use anyway… or bad dialogue.  The art is exceptional, bringing us great visuals and easy to follow action.  I may sound a little over the top in my praise, but it really looks like I’ve been missing out on some good work from Valiant.

After a couple issues (thank you, free comic book day!) I’m ready to do some catching up on back issues.