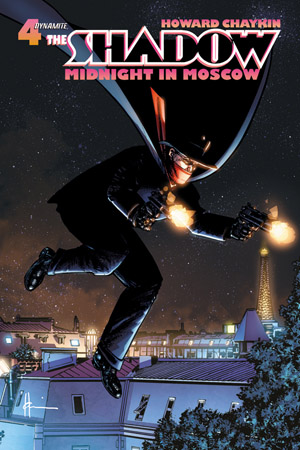 The Shadow: Midnight in Moscow #4 (Dynamite – Chaykin) The City of Light welcomes the Creature of the Night as The Shadow haunts the rooftops of Paris…One step behind his quarry–as the Doomsday clock clicks inexorably to Midnight…

Here’s a title for the purist in us all… Fans of the Shadow are going to be “all in”, because this title brings us more of what we already like: melodramatic dialogue- check; villainous plots with worldwide ends- check, check; a hero with a single-minded determination to root out evil in all its shapes and forms- BIG check!

It gets a little tough to follow some of the globe hopping that’s going on, but that could very well be because this is the first issue of the story I was introduced to. Some of the action and fight scenes can be confusing too, and oddly enough I’m going to chalk it up to a lack of action words (“BAM”, “BIFF”, and “BOP”).

Our hero is tracking a pair of mismatched villains with malicious intentions, the Texas tart Dixie, and her British partner in crime Saint John. The trail starts the Shadow out in London as he works his way up the food chain of criminals, trying to track down the dastardly duo. From London we go to Paris, then on to West Berlin, and finally the weaving and wildly swinging plot drops us into Moscow.  By the end of the issue, we’re still not one hundred percent sure of the villains’ “endgame”, but with the Shadow in dogged pursuit, we should be sure that it can only be Evil of the highest caliber.

This should be a great read for anyone who’s a fan of the pulp genre. The Shadow is a tried and true hero, and any attempts to change him would give us… well, Darkman, I guess (fun fact, Sam Raimi’s “Darkman” was supposed to be “The Shadow”, but got gummed up in copyright disputes). His monologues are the stuff of pulpy legend, and we wouldn’t want them any other way. His diatribes against all that is wrong and evil in the world made me want to turn around and let the cashier at Walmart know that she undercharged me… because, let’s face it, “the Shadow knows”.

Newcomers to the world of Lamont Cranston (if you don’t know who I’m talking about, it would be you that I’m talking about) might be put off by the period-centric language, and heavy-handed morality. To really enjoy this book, you’re going to need to be able to put aside your modern era sensibilities and jaded outlook. The Shadow is an old-school anti-hero who lives in a world that has no shades of gray. It’s either Right, or it’s Wrong, and woe be unto whoever falls on the other side of the fence.