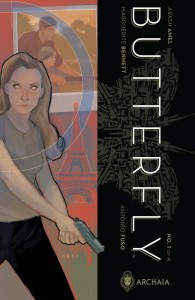 Butterfly is one of Project Delta’s deep cover agents, no birth certificate, no social security number, a complete ghost. When her cover is blown and she is set up for a murder she did not commit, she is unknowingly led to her father’s doorstep, a man she thought died 20 years ago. Codenamed Nightingale, her father was once a member of the very same Project Delta, a spy in the violent aftermath of the Cold War, and believes they are behind her setup. Trained to trust nothing and no one, Butterfly must decide whether to seek answers with the Project, or believe the man who betrayed her years ago.

Flashback: A young girl with her father, learning how to shoot a rifle. A first person inner dialogue takes us through the flashback, and tells us that the father is killed in action five later in Somalia. She wonders at how fragile a life is, being taken by the smallest things; brain aneurism, cardiac infarction, or a .22 caliber bullet. She also wonders if her memories of the flashback are true.

When her father taught her to shoot, she went by “Becky”. When she worked for the CIA, her name was “Rebecca Faulkner”. As an operative for a mysterious organization called “the Project”, she’s known only as “Butterfly”.

The preview for this mini-series introduces us to Butterfly, as she begins an assignment for the Project. She takes on a disguise, going from blonde beauty to what could easily be seen as suburban housewife, changing her eyes, her hair, and adding in a baby stroller for good measure. Everything a good spy would need to do to follow a target.

What happens next is anybody’s guess, but in the few pages I have to go by I was strongly reminded of the TV show “Alias”. It was a favorite in our house for the time it was on, so the association here is a good one. We’ve got a woman of mystery, a shadowy organization, childhood memories put into question, all of the ingredients needed to put together an interesting bit of spy drama.

We could have the makings of something cool here.