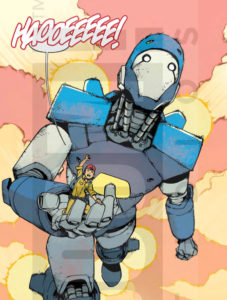 I singled out ‘Mech Cadet Yu” #1 in my monthly cool covers column in June (or it just missed the cut, but the book stuck in my mind since) and Oh boy.  I kind of…okay wait.  I love Greg Pak, just saying, since he came into his own with “Hercules” and creating Amadeus Cho (I forgive him World War Hulk, I blame editors not him).  “Totally Awesome Hulk” was…wait for it…totally awesome.  I love the way he addresses race in a way that is empowering and not over the top preachy.  Everything he touches is fresh and energized, not an easy thing to do in mainstream comics.  Just Google his picture, he looks like the nicest guy in world.

I expected “Mech Cadet Yu” #1 by Boom Studios to be a ‘totally’ throw away book.  Not bad per say,  just not inspired in an, “Oh my god my deadline is in two days I need to got the the coffee house and get this book done,” sort of way.  Holy cow was I way off the mark.

This is a comic you need to pick up.  In, like, a Robert Kirkman “Invincible” #1 sort of way, pick it up.  Sure it’s a trope; kid with giant robot, but I’ll tell you what right now, this trope from Greg Pak’s pen is so well handled you’ll think you were reading the story for the first time.  In one issue we know the main character, the societal problems he faces, the chance he’s given and the jerk wads that will stand in his way.  His Mom is cool too. The art is, obviously, very manga-esque, and so very clear and well told graphically.  The colors simple, flat, effective, comic coloring at its best.  There was nothing wrong with the book, and I was simply floored.  I was floored it could be carried out so successfully.

Do yourself a huge favor, it’s so good it’s a quick read, and pick up a copy “Mech Cadet Yu” #1 from Boom Studios.  Complain to your comic store if they didn’t get some copies.  It could be the most impressive  Boom book I’ve read in awhile, thank god they are out there taking risks and letting great talent explore and create!