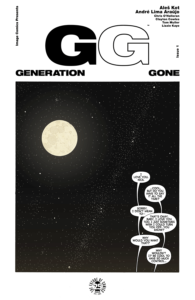 My favorite Ales Kot @ales_Kot book was “Change” back in 2012, I think.  I loved the way it flung itself at the off the wall and splattered in metaphysically gaudy colors.  I was less thrilled with his mainstream stuff, but maybe because it was main stuff.  I thought Ales Kot was better when he chose to swim in the weird end of ideas let loose.

So, when I read the blurb in Previews for Generation Gone #1 I was intrigued, and as #1 heads into a second print the intrigue for apparently good reason.

Generation Gone was not as off the wall as I would have like, that’s just me.  The strongest part of the story were two dysfunctional relationships, one between two of the main characters, and the other between government scientist baddie and his military boss, both relationships which can only lead to trouble down the line.  While I wanted a bit more reason for the main characters to be ‘hackers’, like what were they rebelling against, what was ‘bad’ about the world, and why I cared about their cause, like the character’s in Warren Ellis’ “Black Summer”, I was still however drawn into the story.

The art was spare, but very clear, each character clearly recognizable, in a Preacheresque or Manhattan Project sort of way.  The visual story telling was clear and unconfusing, but it was Mr. Kot’s dialogue that really carried the subtleties of this story.  Light turns of phrases and precise timing, conversations a bit uncomfortable.  Okay, not just a bit uncomfortable. And the art at those moments managed to just mirror the creepiness.

Though it was a bit more staid than the more unrestrained Alex Kot that I would have liked, but I’m thinking red herrings laid out in array, so I am curious to see where he takes this.  It has a ton of potential to unwind in quite a spectacular way. 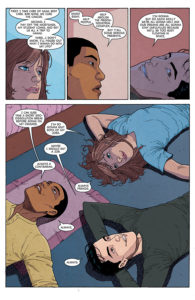