Diego and Gabriel Soliz are two unusual brothers just trying to do their job in an even more unusual city. What’s their job? They’re detectives in a city populated by creatures from mythology and fantasy. When an Aztec skull is stolen from the museum, the BLOOD BROTHERS are assigned to the case!
———-

Brothers Diego and Gabriel Soliz have a relationship that may not be much different from many siblings. On the surface, they couldn’t be more different from each other. Diego, a war-scarred veteran is a hard drinking, rough talking, no-nonsense sort of fellow who always seems to be in the middle of whatever trouble may be in the works. Gabriel is the quintessential Luchadore, noble and forthright, forever getting his hermano out of the trouble he’s gotten himself into. Together, these blood brothers work for the police department, investigating the stranger things that come across their Captain’s desk… “strange” being a relative thing in a world populated by ghosts, demons, and werewolves.

Blood Brothers (“Hermanos de Sangre”) is one of those completely left of center titles that I love getting my mitts on. Pretty much everything I needed to know before pulling the trigger and hauling it out of the Pullbox’s pile of books for review is right there on Javier Caba’s throwback cover. You’ve got the Brother’s Soliz, striking their respective signature poses (although Diego’s posture might be just a little upright and official looking for the rest of the book), while a question mark bearing a sinister looking skull is superimposed between the two. The overall impression, from the main characters to the classically stylized logo, got me thinking back to the Sunday morning showings of movies featuring the likes of El Santo and the Blue Demon.

I had to read it.

The urban fantasy setting of Blood Brothers is a world of the supernatural, and when a crime involves the paranormal the police department calls on Diego and Gabriel Soliz to investigate. Gabriel is well suited to these investigations by virtue of his ability to see and speak to the spirits of the dead, a talent tied to his wartime injury. This injury is briefly touched on in a flashback that opens to the door to a deeper history, and gives a bit of insight into Diego’s surly demeanor. Gabriel’s assistance is essential when taking on the forces of supernatural evil because… well, because he’s a luchadore. Anyone who’s watched any of those classic old movies knows that when it comes to fighting demons, vampires, and mummies, you need a luchadore.

The creative team of Fabian Rangel, Jr. & Javier Caba have put together a world of oddball and over the top characters, with nothing too heavy to digest in the opening installment. The brief flashback to an unidentified war gives us a taste of some backstory to come, but for now we know plenty to get into a story that should be a fast-paced thriller. Rangel’s writing gives an introduction to the crime fighting Soliz brothers that lets readers dive right into the action. We don’t need to know everything, but I felt like we were given plenty to get us started… Diego gets into the trouble and Gabriel gets him out of it. Rangel’s writing is very well complimented by Javier Caba’s artistic style. It works out great with the pulpy subject matter and setting, and brought to my mind the work of Brian Hurtt on The Sixth Gun and The Damned (both outstanding titles, if you haven’t given them a look yet).

Channeling the spirit of El Santo himself, and bringing in a bit of the little known movie classic Cast a Deadly Spell to really flavor it up, Blood Brothers #1 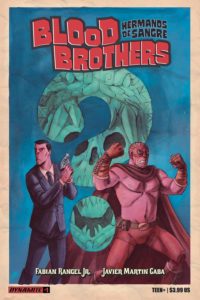 is a good start to a series that should be able to provide all the fisticuffs, suplex body slams, and movie serial cliffhangers an overgrown kid could possibly want.