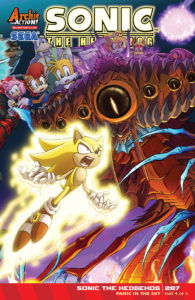 SONIC BATTLES at the CENTER of the PLANET in “Panic in the Sky” Part Four: This is it—the cataclysmic clash and ferocious finale to the Shattered World Saga! Super Sonic leads Chip into battle against the dreaded Dark Gaia with the Freedom Fighters at ground zero! With the fate of the world at stake, who will actually be able to make it home? Featuring the fourth of four EPIC connecting covers by mega-talent Dan Schoening and a “Super” variant by full-time editor, first-time cover artist Vincent Lovallo!
———-

In the world of comic books, there really is something for everyone. Just look around your local comic shop, see the plethora (yep, I said plethora) of subject matter you’ve got to pick from. It isn’t all about superheroes and angsty vampires. Every now and then, even I need a palate cleanser, and it was with that in mind that I took a look at Sonic the Hedgehog.

The final issue in the Panic in the Sky story arc finds some pretty catastrophic consequences to Dr. Eggman’s latest rule the world scheme. In his attempts to harness a long untapped energy source, the evil Doctor has released the dual spirits of the earth: Light and Dark Gaia, and fractured the very planet we live on. Light Gaia has no memory of who it was, but was found and taken in by Sonic and his crew. Under their care, and going by the nickname of “Chip”, Light Gaia is trying to come to grips with his true identity.

Meanwhile, the sudden release has shattered Dark Gaia into pieces, and those pieces have scattered across the shattered world. Now monsters created from Dark Gaia’s essence have risen up to raise hate and discontent. Now Sonic, Chip, and the rest of the Freedom Fighters have been seeking the power of seven Chaos Emeralds and Gaia Temples to put an end to the crisis before things get too out of hand. On their side is Chip, now piloting the combined might of the Gaia Temples- gathered together into a sort of Mecha Temple- and a super charged Sonic, against the might of newly reformed Dark Gaia!

I was a proud owner of the original Sega Genesis back when it was the “great new thing”, and I spent many, many hours chasing those rings around the screen and releasing captured bunny rabbits from the evil Dr. Eggman. When my daughter showed up, it became the thing where she’d watch me playing, cheering me on and talking to Sonic as he ran across the screen. By the time anything like cartoons or books came around, she’d moved on to bigger and better things, leaving just me and Sonic to save the world.

Sure, that might be a little melodramatic, but it was still kinda cool coming back to what is apparently a property that’s still going strong (issue 287!). Is Sonic the Hedgehog going to satisfy more discerning and mature comic book readers? Probably not, but what it will do is give comic book readers who are also parents something to do along with their kids. Looking for something to sit down and read together? What better way to start developing an interest in reading than a comic book? Need some bedtime reading material? Unless there’s something seriously wrong with you, you’re not going to reach for a copy of Hellboy or Escape From New York.

If my kids were still of that age, there would likely be a stack of Sonic the Hedgehog on standby. And if you were playing the game or watching the old cartoons, this series might tickle the ole nostalgia bone while you’re at it. 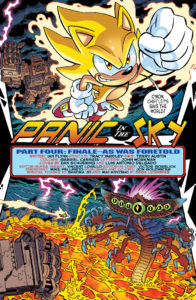 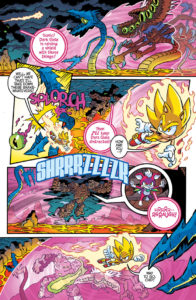 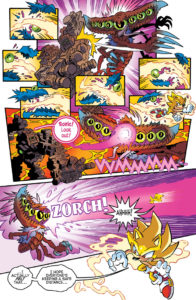 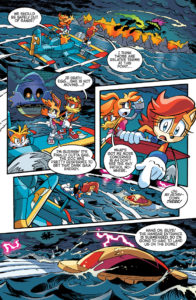 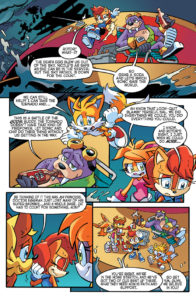 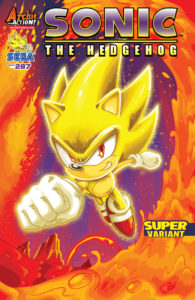