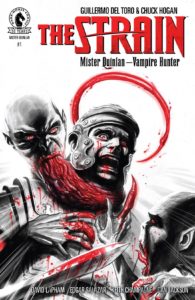 The origin of Mr. Quinlan! A vampiric abomination seeks to destroy the monster that sired him. Born as a mistake of a powerful vampire known as the Master and raised in the brutal gladiatorial arenas of ancient Rome, Mr. Quinlan must survive long enough to carry out his mission when his target begins hunting him. Go back to the beginnings of a popular character from The Strain. Watch The Strain on FX!
———-
Anyone who’s been watching The Strain on FX, or who’s read the books written by Guillermo Del Toro and Chuck Hogan, should be familiar with Mister Quinlan. If you’re not familiar with the story, or Mister Quinlan’s story in particular, consider a combination of Blade and Van Helsing. If you’d like to know more about this enigmatic and unlikely action hero, you’re in luck because Dark Horse is giving us a miniseries exploring this mysterious figure’s origins.

In 40 A.D., the “mad emperor” Caligula held the Empire in his grip. If it was wrong, sick, or twisted, odds are pretty decent that this guy was up to his elbows in it. To him, Rome wasn’t just a kingdom to be ruled or a people to be led. It was his own personal playground, over which he held complete and total control, open to every whim that crossed his mind. Among Caligula’s trusted inner circle, none held a place closer to the man than a certain unassuming slave boy named Thrax.

As so often happens in these stories, Thrax was not what he seemed. The slave boy was nothing but the current residence of the vampiric horror that would come to be known as the Master. Over time, Thrax worked his way deeper into Emperor Caligula’s graces, to the point that he was the mad king’s most trusted advisor and confidant.

Of course, history has a way of shaking the game up when the players get a little too comfortable. In the middle of his weekly feeding, seven pristine virgins being his personal favorite, Thrax is interrupted when Caligula’s Praetorian Guard burst in with news of an assassination attempt. Caligula survived, this time, but he demanded the presence of his trusted pal Thrax.

And this is where it gets interesting, if maybe just a little bit predictable. One of the slave girls to survive this feeding frenzy wasn’t as “pristine” as she was supposed to be. She was, in fact, pregnant. As can be expected, even among vampires this kind of thing was to be discouraged. Before anything could be done about this little mistake, the girl made her escape with the help of the vampire pathogen coursing through her bloodstream, already starting to work its magic on her physiology.

She ran, far and fast, until she found a place to lay low and give birth to her precious little monster. So it went, mother and son moving from place to place, staying in one spot until their feeding habits created a problem and then taking off for the next hole in the ground. The boy grew, like his mother requiring blood to survive. Unlike his mother, however, he was able to go out into the sunlight. Like a… daywalker or something…

The story progresses, as they often do, and sooner rather than later the mother/son duo is broken up. The boy is captured, and in his resilient savagery some potential for profit is seen. Healing from wounds that would be fatal for most, prone to violence and displaying a literally bloodthirsty attitude, he’s sold to the “Ludus Magnus”, the grand gladiator school in Rome itself. This is where the killing machine that will one day become Mister Quinlan is born. First called “Canis Candidus” (White Dog), and then after distinguishing himself in the arena earning the name “Bellator Candidus” (White Warrior), the legend grew.

Personally, I think Mister Quinlan is the most interesting character in the television series so far (I’ll confess to only having read the first two books at this time, and Quinlan hasn’t fully stepped out of the shadows yet). I was pretty damn excited when I found out about this miniseries, and was doubly impressed when I read it and found that Dark Horse hasn’t pulled any punches. So far, this tie in looks to be every bit as awesome as it should be. 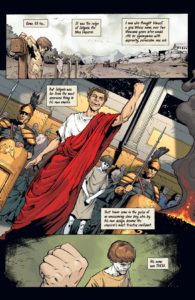 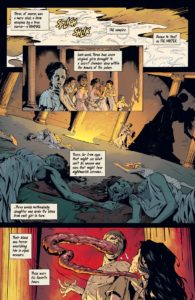 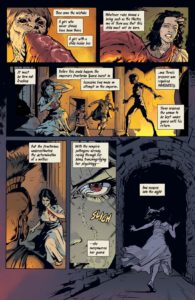