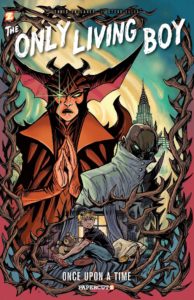 In the third collection of the hit webcomic THE ONLY LIVING BOY, Erik Farrell finds himself at the mercy of the villainous Doctor Once. But, of course, Doctor Once has NO mercy! Surrounded by strange creatures and sinister experiments, Erik’s very life hangs in the balance. Even if he finds the strength to escape the hideous laboratory, Erik won’t be able to escape his tragic past, or his destiny. Gallaher and Ellis’ daring adventure series about an ordinary boy on an extraordinary planet continues in “Once Upon A Time” — the newest book in the acclaimed Only Living Boy series.
———-

12 year old Erik Farrell’s trip through the twisted rabbit hole continues. He’s been bounced from place to place since finding himself deposited on a broken, patchwork planet, and he’s seen people and places that oddly mirror things from his old life. From the underground city of the Groundlings, to the watery Mermidonian kingdom, and to the flying city Sectuarius, Erik has struggled with his fears and insecurities. Now the prisoner of the terrifying Dr. Once, Erik will face the truth and either come to grips with it, or let it break him completely.

As far as modern day fairy tales go, The Only Living Boy has stood out from the crowd. At its core, it’s about a boy trying to gain some control over the events that have tossed him back and forth through his life. He’s the quintessential “troubled young man”, intelligent but socially awkward with a history of fighting. Through the first two volumes of the story, Erik has been tossed from place to place without much control over his circumstances. He’s made a few friends, but for the most part he hasn’t been in a position to be of much help to any of them, instead relying on the help of others to get out of one predicament after another.

By all appearances, the end of volume 2 found Erik back home, with all of his misadventures nothing but the imaginative escapism of a troubled twelve year old. Erik’s story has been presented in a way that calls everything into question. Has he actually been transported to an impossible world, where an evil dragon rules and the demented Dr. Once pursues Erik with single-minded determination? Or is Erik’s story more tragic than that, nothing but a young mind trying to make sense of/escape from disturbing events over which he has no control?

At times, the narrative has bounced right along with Erik, and there was the impression that this young fella was more plot device than protagonist. Just like Indiana Jones in Raiders of the Lost Ark, he holds the distinction of being the main character while simultaneously having no real impact on his own story. It took me a bit, but once I realized that Erik’s perceived helplessness was a reflection of his own inner fight, The Only Living Boy became a larger and much more layered story. Not just a visually impressive trip through a sadistic Neverland that would leave Peter and his Lost Boys weeping in a corner, there’s also a deeper psychological study going on.

Trust me, all of the little details and quirks of the story eventually come around and make sense in a larger picture. I’m sure that even this deep into it, the story is just starting to get moving but if you can keep up with it there’s a pretty cool payoff at the end of this chapter. 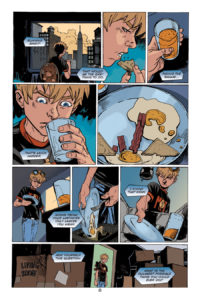 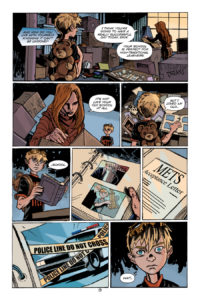