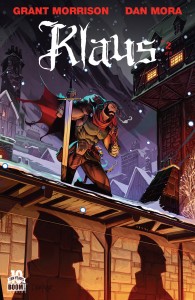 Klaus #2 (of 6) from Boom!Studios
Written by Grant Morrison
Art by Dan Mora
Set in a dark fantastic past of myth and magic, Klaus tells the story of how Santa Claus really came to be. Where did he begin? What was he like when he was young? Why does he do what he does? How does he do what he does? And what happens when he faces his greatest challenge? Drawing on Santa Claus’ wilder roots in Viking lore and Siberian shamanism – taking in the creepier side of Christmas, and characters like the sinister Krampus – Klaus is a “Santa Claus: Year One.”
———-

Okay, maybe in my world, the part of Klaus wouldn’t be played by Liam Neeson (definitely a young Arnold, though…), but this is not your jolly ole’ Saint Nick. Not yet, anyway.

The series Klaus, from Boom! Studios (love these guys, by the way) takes on the myth’s Nordic roots. Klaus is one step removed from what passes for civilization in these old days, living in the forest with his wolf companion and only venturing into the cities for the occasional supply run. On his latest trip into the city of Grimsvig, Klaus has found something that goes against everything he believes in. The children of the city are being oppressed, anything resembling fun has been forbidden and their toys have been taken away at the whim of a madman. Lord Magnus has decreed that since his son Jonas is too “ill” (read that as spoiled and pampered) to leave the confines of the castle, it wouldn’t be fair for him to see other children laughing and playing. Therefore, all toys within the city’s walls belong to Jonas. What’s more, as Lord Magnus attempts to wring every last bit out of the coal mines, the celebration of Yuletime has been canceled so the men have more energy to focus on their work.

In the first issue of this medieval action move put to paper, Klaus was discovering that things were not well in Grimsvig. His first impulse was to leave the city, turn his back on problems that he didn’t need to make his own, and stick to the forest life. That was the plan, until he found out about the children. The new plan? There will be Yuletime for the children, come hell or high water…

The second chapter in this timely piece of work has Klaus infiltrating the city of Grimsvig, stealing over the wall like a great lurking shadow of seasonal cheer, and leaving his hand crafted toys for the children of the city. The mischievous fellow even manages to leave a calling card behind in the form of a big holiday smile painted on a poster of Lord Magnus. The city’s guard, led by Sergeant Linkvist, is in a frenzy trying to track down the source of these Yuletime hijinks, but not before Lord Magnus himself steps out into the streets to see what the hubbub is about. Suffice to say that the city of Grimsvig is turned upside down as the guardsmen are put to the task of finding this upstart bringer of cheer and joy, and putting to work in the coal mines for his trouble.

I gotta say, Klaus is a great bit of fun, taking the legend of Santa Claus back to its roots… Grant Morrison and Dan Mora have put together a rolling adventure story that tries to shed some light on the myth we all know, on the legendary figure loved by children the world over. Like the publisher’s tagline said, this is “Santa Claus: Year One”. The jolly ole’ elf we know is no where to be seen in these pages… Klaus is a hard man, living in hard times. He does have a sense of justice, right and wrong, naughty and nice, and you’d better have yourself planted firmly on the right side of that list 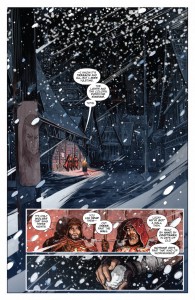 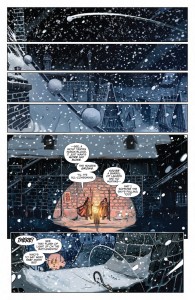 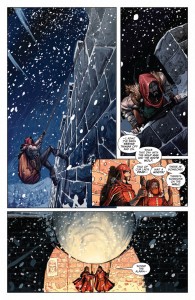 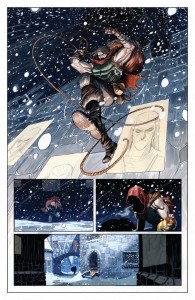 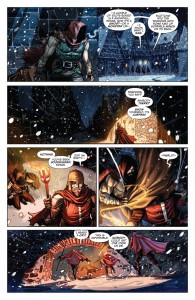