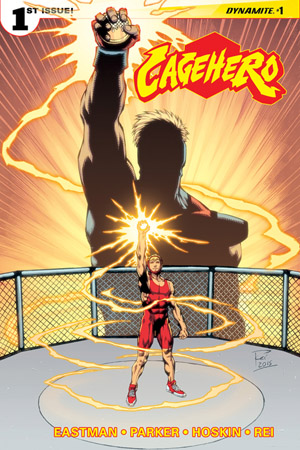 Cage Hero #1 (Dynamite Entertainment – Parker / Eastman / Hoskin / Rei / Campbell)
ON SALE DATE: November 4
From the minds of Kevin Eastman (co-creator of Teenage Mutant Ninja Turtles), Ian Parker (MMA expert and former UFC Manager), and Mark Mastrandrea (MMA personality), comes Cage Hero! A middle school student and wrestling star, raised by his strict grandfather, finds himself on an epic journey to meet his true destiny when he is recruited to lead a super-powered team of mixed martial artists known as the Cage Heroes! Fourteen year-old Ryder Stone must meet the challenge to lead a group of young talented MMA fighters from across the globe, and still maintain his grade point average. Trained in their own unique martial art discipline, all connected by a secret past, this new team will have to dig deep with themselves to protect the world from an evil network known as the Shadow Empire.
Right here, right now, this isn’t a team book.  It’s the story of Ryder Stone, a young man on his fourteenth birthday who desperately wants to know his parents.  Ryder and his grandpa have moved a number of times, so he’s always the “new kid” at school, and his only chances to fit in are his good looks and his uncanny talent in wrestling. Grandpa is extremely skilled at sidestepping questions about his parents, keeping even photos and mementos under wraps.
The team of Parker/Eastman/Hoskin have drawn the reader into this coming-of-age story adroitly and drop just enough breadcrumbs that we know to pick them up before they become important later.  Rei’s artwork is dynamic and completely fitting with the tone of the story. Campbell’s colors reinforce the “normal, nothing to see here” life until that theme necessarily changes.
Truthfully enough, a comic that is advertised as an MMA team book didn’t hook me in right away.  Reading it made me appreciate Ryder’s story, setting him up as the main protagonist for the mini. There’s a sincere lack of women that aren’t teachers or girlfriends, and the skin tones only change during wrestling matches.  However, this is a good origin story for a new hero, and hopefully the rest of the  team won’t be as Hetero White Male as this first issue.