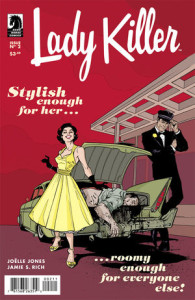 Lady Killer #2 (Dark Horse – Jones / Rich)
Josie’s life grows more complicated than ever. Between the demands of her family life (including her disapproving mother-in-law), the challenges of performing as a ruthless assassin, and being underestimated by the men she works for, how can she do it all—and make it look so good?

In the days of the lunch hour martini and the Dick Van Dyke Show, the world seemed to be a simpler place. The Russians were the bad guys. Cigarettes were cool. The Beatles ruled the airwaves. Men brought home the money, and their wives were at home to greet them when the day was done.

Josie’s good at her job, despite the challenges of living two lives. Friends and family believe she spends her day working at a hospice care facility. Her boss thinks her family life is a complication that he could live without. Scheduling her assignments around her family life isn’t easy. Looking to push the issue, he gives Josie a job that’s a little less pleasant than what she’s used to.

Will Josie cave in to the demands of her profession? Will her husband ever catch on to his wife’s double life? Will her boss realize that women are fully capable of doing the same work as the men, and should be given equal pay for it?