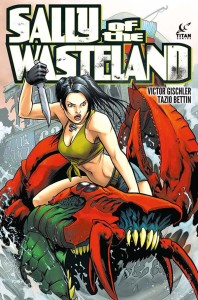 Sally of the Wasteland TPB (Titan Comics – Gischler / Bettin)
Sally’s just your everyday post-apocalyptic young woman, shooting mutant fauna by day, hanging at the local bayou bar by night. She might be slightly insane, but that’s all to the good after the fall of civilisation. But Sally cares about one thing above all others, and that’s her innocent, fair-haired boy, Tommy.

When Tommy takes off on a treasure hunt to the forbidden city of New Orleans, Sally follows the boy she loves on his expedition, because hell knows he can’t take care of himself…!

A satirical popcorn adventure, punctuated with garish set pieces and bawdy one-liners, Sally of the Wasteland is intended for the enjoyment – and delight – of mature audiences!

Collects Sally Of The Wasteland 1-5

Definitely not for kids, or some adults for that matter, Sally’s adventures in this post-apocalyptic comic are a throwback to the exploitative movies of the 70’s and 80’s. Only more violent, more gore spattered, and better written. Open this one with a mind set to enjoy a fast paced, loosely tied together series of events, highlighted by dialogue that sets tongue firmly in cheek.

Sally isn’t alone in her quest to find the wondrous tech stuff of the past. She’s joined by her boy-toy (she wishes) Tommy, Captain Sam (who looks a lot like Ron Perlman to me), and the “Bamazons”. The cast of characters are an indulgence, very well… uh… drawn in a style reminiscent of Adam Hughes, and the action works very well on the page. And did I mention the dialogue? Where this story might be short on inspirational messages extolling the greatness of humanity and a bright future for all, it’s high on wit and banter.

This is just a fun read… not for the easily offended, though. 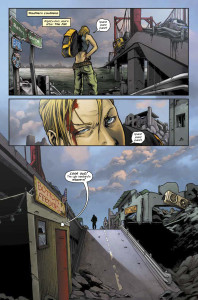 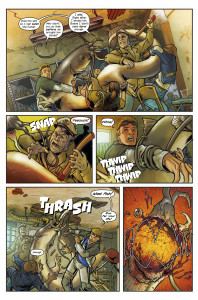 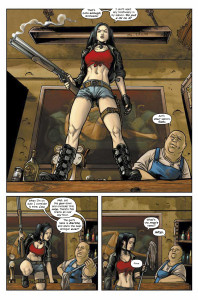 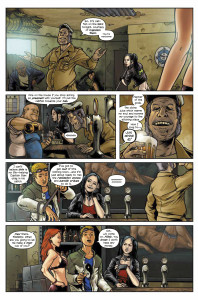 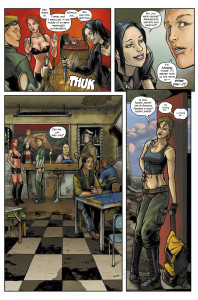