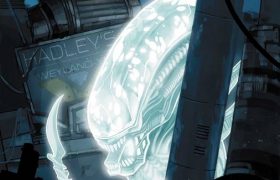 This July, Marvel Comics will honor the 35th Anniversary of Aliens with a special one-shot by writer Benjamin Percy(Wolverine, X-Force) and artist Dave Wachter(Iron Fist: Heart of the Dragon). Celebrating one of the most influential science-fiction films of all time, ALIENS: AFTERMATH #1 will be a double-sized issue featuring an all-new story set in the same terrifying universe of Aliens. […]

THE GUNS OF SHADOW VALLEY | Dave Wachter | James Andrew Clark | Thomas Mauer Somewhere in Shadow Valley lies a secret that could forever change the frontier. Only a posse of gunmen with special abilities can defend that secret from a tribe of ghostly warriors, an advancing army led by a deranged colonel, and the […]