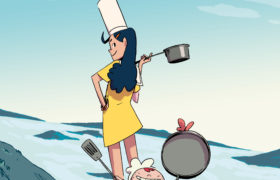 Discover The First Ongoing Series From I KILL GIANTS Co-creator and Artist Ken Niimura, The Fantastical Cooking Comic UMAMI On Friday, March 23rd, the release of the film I KILL GIANTS starring Zoe Saldana will introduce a new audience to the acclaimed graphic novel by writer Joe Kelly (BIG HERO SIX) and co-creator and illustrator […]

Archaia, an award-winning imprint of publisher BOOM! Studios, is pleased to announce the January debut of the new limited series Feathers. Following in the footsteps of Archaia titles Rust, Iron: Or, the War After, and The Reason for Dragons, creator Jorge Corona’s(Goners) first original work is an an all-ages adventure that dives into the darkness […]