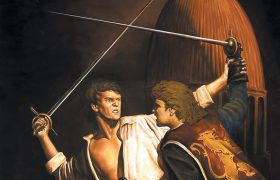 From Ken Mora & Bella Fe Media CARAVAGGIO: A LIGHT BEFORE THE DARKNESS by Ken Mora is recognized as Winner in the category of Graphic Novel by Independent Press Award®, 2021. Graphic Novel CARAVAGGIO: A LIGHT BEFORE THE DARKNESS is published by Bella Fe Media [US] and distributed Internationally by MARKOSIA ENTERPRISES [UK]. The artist known as Caravaggio […]

Having duped the resident college brainiac into giving her his powers-inducing glasses, and found herself in a position where, in the absense of Maine’s resident super-heroine, she’s promised to stop badass new super-villain Lightning Storm – Ruby Kaye has now inadvertently hospitalised her city’s other resident super-hero (and only potential aide) while trying and failing […]