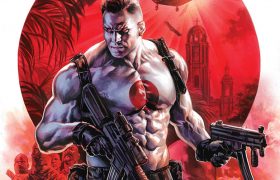 This April, the secrets of Archangel will be revealed as Magneto and his team prepare for war. Today, Marvel is pleased to present your first look inside UNCANNY X-MEN #6 –  the start of the Uncanny X-Men’s foray into Apocalypse Wars! Writer Cullen Bunn and artist Ken Lashley take you on a mission to save […]

This Spring, one of the X-Men’s greatest foes wages a cataclysmic battle on three fronts. Today, Marvel is pleased to announce APOCALYPSE WARS, three blockbuster stories taking place across the three can’t-miss X-Men titles!   “In the same vein as the classic event “Fall of the Mutants”, APOCALYPSE WARS is a thematic crossover that sees […]