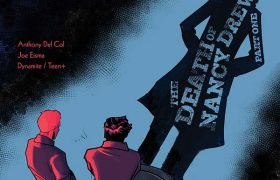 Death opens with an extended intro from the perspective of Joe Hardy as he grieves the loss of his would-be-if-he’d-ever-admitted-his-feelings-but-now-she’s-dead-so-he-can’t paramour. Seems the detecting damsel took on more than she could handle, at least in Joe’s eyes: while the rest of River Heights, including Nancy’s father and even his own brother, is convinced her death (by drowning, after her car flipped into the river) was an accident, Joe is certain she was murdered. And given Drew’s penchant for trouble—specifically, causing such for River Heights’ most notorious crooks, including the Syndicate responsible for the murder of Fenton Hardy (Joe and Frank’s father, as detailed in The Big Lie)—he might just be on to something. 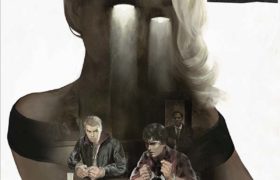 Nancy Drew & the Hardy Boys #1 Dynamite Written by Anthony Del Col Art by Werther Dell’Edera Colors by Stefano Simeone Letter by Simon Bowland Available now! THE BIG LIE is a Nancy Drew and Hardy Boys mystery unlike any other you’ve ever read… When the teenage brothers Frank and Joe Hardy are accused of […]

Dynamite Entertainment further stakes claim to its reputation as the industry’s leading publisher of licensed comics with news today of an exclusive arrangement with Simon & Schuster to bring the beloved characters Nancy Drew and The Hardy Boys to comics with all-new adventures! For almost 90 years, the adolescent crime-solving adventures of The Hardy Boys […]