You can’t keep a bad woman down, and none are badder than Giulietta Romero, the professional assassin that was introduced in the recent Jennifer Blood series. Now writer Fred Van Lente is taking his bombshell bandage-masked hitwoman antagonist into her own story inspired by none other than William “The Bard” Shakespeare. Jennifer Blood Presents: Giulietta Romeo: Hitwoman is a pulse-pounding special starring the breakout character that fans have been clamoring to see more from.

Van Lente will be joined on the special spotlight by talented illustrator Robert Carey, acclaimed for his work on James Bond and other titles. A trio of show-stopping covers by Lesley “Leirix” Li, Drew Moss and Valentina Pinti will complete the package for this winter release to keep fans warm with blistering action and noir intrigue!

Slamming her way out of the pages of the recent Jennifer Blood: Bloodlines series, Italian assassin Giulietta Romeo stars in La Tempesta, a noirish reimagining of the William Shakespeare play The Tempest. Giulietta is being extradited to Italy after the events of the Bountiful storyline when her plane is shot down over a remote island in the Atlantic, a former Nazi stronghold that is now the tiny kingdom of a man named Prospero, a former duke of the Naples mobs. His brother, the man who usurped his position, was being extradited on that same plane, and Giulietta finds herself in the middle of a gory blood feud and fighting for her life against Prospero’s monstrous servants, Caliban and Ariel.

“I think all readers will really love the Hot New Crime Writer of 2022, William “Bloody Billy” Shakespeare,” said Van Lente. “I’m just the vessel that is bringing the island mob vengeance saga The Tempest to life.” While unavailable for a new comment, Shakespeare has been quoted to say of the story, “Hell is empty and all the devils are here.”

Mark the date on your calendars! Dynamite Entertainment has a bright eyed baby vampire to bring into the world this December. VAMPIRELLA: YEAR ONE #6 is set to feature the first ever appearance of Vampirella’s very own baby!
Vampirella made her debut appearance over 50 years ago, back in 1969’s Vampirella #1. Both her devilish, blonde-haired sister Draculina and her sometimes cousin/sometimes ally Evily the Witch followed the next issue. The Vampi mythos has grown over the years with more character introductions like her mother Lilith, allies Pendragon, Conrad and Adam Van Helsing, Pantha, and many more. Legendary writer Christopher Priest has even introduced a handful of new characters in his continuing acclaimed tenure on the franchise that started by celebrating that 50th anniversary. Now in the finale of his latest chapter, one of the most exciting additions to the cast will make their debut! But is the child a blessing, or curse?

First comes love, then comes marriage, then comes baby in a baby carriage. But in Vampirella’s world, life doesn’t always go according to the fairy tales. Her complicated marriage with Matt Ecsed was motivated in part by a goal of preventing a curse that would resurrect and empower the devious Dracula, king of the vampires. In the epic finale of Vampirella / Dracula: Unholy, the Daughter of Drakulon became a widow, and now carries her late husband’s child. Then in the hotly anticipated Year One, Priest and artist Ergün Gündüz have been reaching back and expanding on Vampi’s earliest days as a rebellious teen on her home planet and what lead her to her adoptive Earth. In moments between these flashbacks, the saga continues with her pregnancy.

Dynamite invites fans to be a part of history and add this major turning point in the tapestry to their collections as Year One concludes with a big bang, before Priest then moves on to the next set of twists and turns in his nearly 50 issue run. But the ultimate question is, just like their departed father before them – is this baby a blessing or a curse for our dear Vampirella?

The image in this release is from Vampirella: Year One #1. Fans will have to stay tuned and pick up the finale for the official unveiling of Vampi’s baby.

Series Debut! Vampirella: Mindwarp #1
Writer: Jeff Parker
Artist: Benjamin Dewey
Covers: Joseph Michael Linsner (A), Benjamin Dewey (B), Lesley “Leirix” Li (C), Jonathan Case (D), Cosplay / Katie Baker (E)
32 pages | Horror | $3.99 | Teen+
VAMPIRELLA FACES A DEADLY NEW FOE WHO WANTS HER POWER – AND HER IMMORTALITY!
It’s a deadly chase across reality in a Vampirella epic unlike any you’ve seen before. Enter the twisted world of Mindwarp! Meet Baroness Gruzal, an evil sorcerer with an ancient crown that possesses dreadful powers. Gruzal’s ambition is to live one thousand years – and she plans to accomplish this by stealing and inhabiting the powerful body of Vampirella! What follows is a mad chase across time and space itself, as seen through the prism of Vampirella’s wild history and dark origins! Don’t miss this new, brain-melting epic from the feverish minds of writer Jeff Parker (Aquaman) and artist Benjamin Dewey (Namor)!

Immortal Red Sonja #6
Writer: Dan Abnett
Artist: Alessandro Rinaldi
Covers: Lesley “Leirix” Li (A), Junggeun Yoon (B), Joseph Michael Linsner (C), Jonathan Lau (D), Cosplay (E)
32 pages | Sword and Sorcery | $3.99 | Teen+
A NEW QUEST BEGINS – BUT CAN RED SONJA COMPLETE IT BEFORE A CURSE CATCHES UP WITH HER?
A new storyline begins as Sonja the Red realizes her destiny. The journey has been long, the dangers grave. But with a fuller understanding of the cursed chainmail on her back, Sonja will strive to finish her quest before the dark forces on her path overwhelm…

Madballs Vs. Garbage Pail Kids #3
Writer: Sholly Fisch
Artist: Jason Crosby
Covers: Joe Simko (A), Jason Crosby (B), Classic Trading Card (C),
32 pages | Humor | $3.99 | All Ages
THE GROSSEST OF THE GROSS – TOGETHER AT LAST!
For the first time in recorded history, the “heavyweights of gross” have combined forces in a massive merchandising blitz that pits the Madballs against the Garbage Pail Kids! And, as part of this blitz, Dynamite presents the comic book cross-over of these iconic 80s brands!
For over three decades, Madballs and GPK have both been known as the “grossest of the gross”, co-ruling counterculture with their pun-heavy names and subversive humor. This all-new limited series event features the first time these two delightfully crude forces have ever met! This issue: “Block Busted”, “Disorder in the Court,” and two (!) Puzzle Pages!
Written by Sholly Fisch, each issue features three incredible Covers: Legendary Garbage Pail Kids artist Joe Simko, series artist Jason Crosby and a special trading card team-up cover, created specially for this momentous meeting of the (depraved) minds!

Army of Darkness Vs. Reanimator: Necronomicon Rising #3
Writer: Erik Burnham
Artist: Eman Casallos
Covers: Tony Fleecs (A), Christopher Mitten (B), Arthur Suydam (C), Stuart Sayger (D)
32 pages | Horror | $3.99 | Teen+
YESTERDAY’S DR. WEST GIVES TODAY’S DR. WEST A TIME-TRAVELING MISSION!
When an archaeological dig unveils an important element from the world of the Army of Darkness, it ends up in the absolute worst hands of all…Dr. Herbert West. As West tinkers in God’s domain, our reluctant hero is once more drawn within the sphere of destiny as he faces a triple threat of danger!This issue: The future! (Or, you know, “a” future – things get tricky when the Necronomicon throws our hero back and forth in the time stream!)
Ancient Herbert West makes “normal” Herbert an offer he can’t refuse…but, as always, the Necronomicon has plans and offers of its own!Writer Erik Burnham is joined by returning Dynamite artist Eman Casallos to bring you all of the excitement and deadite action! Joining Dynamite superstar cover artists Arthur “Zombie King” Suydam and Stuart (KISS) Sayger is Tony Fleecs (Stray Dogs) and the Dynamite debut of Christopher Mitten (Hellboy)!

Army of Darkness 1979 Trade Paperback
Writer: Rodney Barnes
Artist: Tom Garcia
Cover: Arthur Suydam
128 pages | Horror | $19.99 | Teen+
Dare we say it!? Yes, we dare!
ASH IS BACK, BABY!
After his most recent appearance in Die!namite Lives, Ashley Williams is retired. Settled down. Haunted by the Deadites and the Necronomicon no more…no, wait-none of that is true! In fact, not only is Ash still haunted by Deadites and the Necronomicon, he’s haunted by both of them in the 1970s (kids, ask your parents…parents, um, ask yourselves!)! And what does he find in the South Bronx of the late ’70s? Gangs! And what have those gangs found? The Necronomicon, of course! And that makes those gangs some bad-ass mxxxerfxxxers! 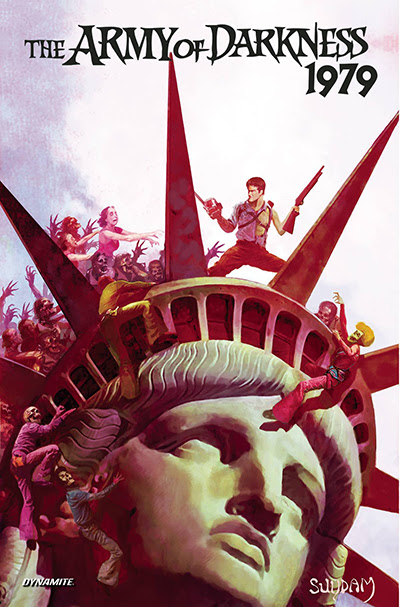