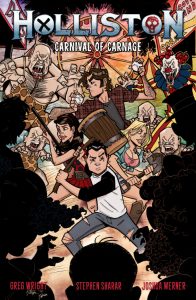 The gang (and nearly every supporting character) from Adam Green’s cult favorite TV show is back! And they’re battling creepy clowns, romantic rivals, and a trip to the freak show tent! When Laura competes in the town carnival’s chili cook-off, her famous “Murder Pepper Chili” transforms the citizens of Holliston into raging zombies, and only our lovable losers/heroes can save the day. Joe has a plan, but will it work? Can Adam face his fear of the freak show tent? Is Corri going to kick a bunch of ass? And will Laura win the contest or whatever? Find out in Holliston: Carnival of Carnage!
———-

Tasked with the soul sucking job of representing their local access cable company at the annual Holliston Carnival (of CARNAGE!), perennial ne’er-do-wells Adam and Joe are determined to make the best of a bad day. Okay, Joe might be the more optimistic of the pair, while Adam is forced to face his greatest childhood fear- the Bearded Lady! Also at the carnival (of CARNAGE!), Joe’s aggressively perky girlfriend Laura will be battling it out in Holliston’s Best Chili competition. Her chili’s killer secret ingredient, guaranteed to knock ‘em all dead at the Carnival (of CARNAGE!)… Columbian Murder Peppers. Also in attendance will be the subject of Adam’s unrequited love, Corri, on a date with the hunky firefighter she met online. Whacky hijinks ensue.

Seriously, if I were limited to a single descriptor for this review, that would be it. Whacky. Or maybe hijinks… that’s a pretty cool word too… fun to say. Right up there with “macadamia”, “gazeebo”, and “hullabaloo”.

A while back, I did a review on the first Holliston one-shot (check it out here if you want… no pressure), and that was the first I’d ever heard of the odd little bit of genre driven jocularity that was Holliston (the show, not the actual town in Massachusetts). Since then, I’ve become a bit of a fan and have done what I can to spread the sickness on to others. For those unfamiliar with the world of Holliston, you might be interested to know that it’s a real place, the childhood home of series creator Adam Green (say hi, Adam). It’s also a little known sitcom with a crazy loyal fan base, originally airing on the FearNet cable network and featuring the likes of Dee Schneider as Adam and Joe’s boss (and Van Halen cover band singer) Lance Rocker, and deceased GWAR vocalist Oderus Urungus (David Brockie, may he forever rock). Since then, the disturbingly puntastic lovechild of Adam Green has lived on through YouTube and in the pages of its very series of one-shot comics published by Source Point Press. If you’re a fan of thinly veiled innuendo and obscure horror movie references, Holliston (the show or the comic, I’m not here to push) is something you might wanna check out.

Now, let’s talk about the comic…

Greg Wright has done his homework, shoehorning in everything that made the Holliston show the enduring piece of schlock and awe that it is. The jokes are rapid fire, never settling in from panel to panel… just laugh and move on, reflection isn’t what we do here. In fact, it might actually enhance the Holliston reading experience if you could cue up a laugh track and have that running in the background. Wright has captured the true secret to successful situation comedy: never give the audience too much time to think about a punchline… keep the quips and puns coming, and never pass up a cheap shot.

For his part, Stephen Sharar has pulled off a pretty amazing feat in that he’s managed to consistently caricature the real life stars of the Holliston series throughout the book. If Holliston: The Animated Series were ever going to be a thing, I’d hope that Sharar is on the short list for character designs. He’s also done a great job of keeping up with the sight gags that go with Wright’s script, and doesn’t let anyone sit still in his panels for too long. Rounding out the visuals, the colors by Joshua Werner uphold the animation style that I thought worked really well… but I think he may have put me off chili for a bit.

Holliston: Carnival of Carnage is the perfect little palette cleanser for anyone looking for something to take their mind off of the serious, and place it squarely in the ridiculous. And if at any time during the reading, you start to feel uncomfortable or squeamish, just let it happen… it’ll all be over with before you know it. 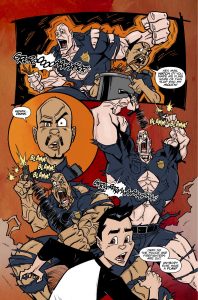 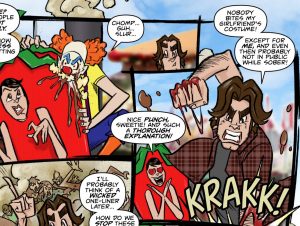 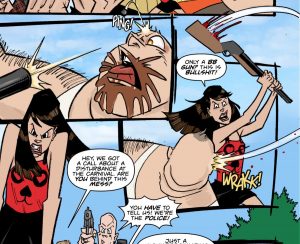 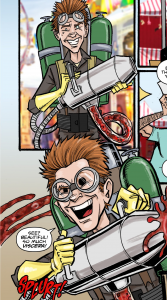 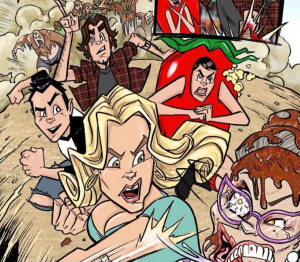 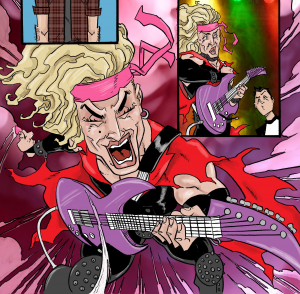