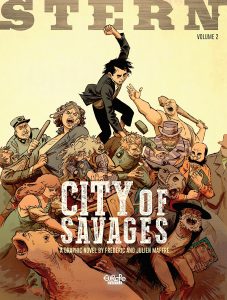 Though he may well be an undertaker, Elijah Stern is a man of culture. When he learns that his supply of literature has dried up he decides to ride out from his small town to Kansas City, where he knows there is a small bookstore, in order to satisfy his reading addiction. A simple task, right? Wrong. No sooner does he arrive when he is mugged. In his efforts to track down his attackers, Stern will cross paths with old friends, new enemies, and, even worse, his ex-wife…
———-

In the small frontier town of Morrison, there lived an undertaker named Elijah Stern. A man of simple wants and needs, Stern is content to care for his small graveyard, with just his books to keep him company. When times get tough and the supply of new reading material dries up, he’s forced to make a tough decision: go without new books or make the half day trek to Kansas City, a place he’d much rather leave behind him.

Not really a choice at all.

Soon after his arrival, Stern meets up with an old… acquaintance… named Fergus. Not long after that, he finds himself beaten unconscious and minus his boots, his mule (Fenimore, after author James Fenimore Cooper), and the fifty dollars he’d brought with him for supplies. From there, it’s a pretty full day as Elijah Stern sets about reclaiming what was stolen, avoiding Fergus’s deranged mother, and maybe even mending a fence or two with a “friend”. When all is said and done, Kansas City will be talking about the day the undertaker came to town for a very long time…

If you’re looking for a classic Western tale, a story of cattle rustlers facing frontier justice and noble strangers defending the honor of defenseless school marms, you might wanna keep on looking. However, if you’re looking for something more than a little “quirky”, by all means pull up a seat and let’s talk about Stern. First, we have to point out that Elijah Stern is nothing like the quintessential hero of the “Old West”. He’d rather spend his days quietly reading a good book… any book, really… than tracking down outlaws. He’s more thoughtful than dynamic, with a dry wit and unassuming demeanor. His trousers are a few inches too short for his wiry frame, and his hairline has slipped back a bit prematurely giving him the look of someone a little older, an impression reinforced by his normally pensive nature.

Frederic Maffre has gone a different route than is the norm for his Western, and as big a fan as I am of those “thrilling tales of yesteryear” I couldn’t be more impressed with the results. He’s created a story about a man born in the wrong place, at the wrong time… a Renaissance Man forced to endure a daily life among the unwashed and unenlightened. No wonder Elijah’s always looking for something new to read. With the exception of the town drunk, “old Glove Hands”- who despite his booze addled nature and heavily scarred hands can play the hell out of a piano- he’s left on his own by the people of Morrison, most of whom think Elijah Stern is a bit of an odd duck.

To round out his story, Frederic Maffre has further populated his book with a cast of characters who would do Quentin Tarrantino proud. These people are just about as three dimensional as anyone else found in the pages of a comicbook- which, by the way, is a term that hardly does Stern justice, and that’s coming from someone who loves comicbooks. Everyone has a story, whether or not it’s told on the page, and could each fill out a book of their own if given half the chance. The end result is something as close to a fully realized world as could be expected in the pages of any book, comic or otherwise.

But this is a comicbook we’re talking about, and that means that a certain amount of art and illustration is expected. Don’t worry, because Julien Maffre & Laure Durandelle have put together a visually impressive body of work. I’ll start with Julien Maffre’s illustrations, because I can’t help but be impressed with his eye for detail. With all of the people in this book- and remember that we’re talking about a lot of people moving in and out of the story- I don’t think I’ve seen two people even remotely similar in appearance. That’s a remarkable achievement, given that even among the most talented artists there are generally certain reoccurring features present. Also, Julien doesn’t stick to any of the stereotypical types in his character designs. Much like Stern himself represents the near-total opposite of the Western Hero Archetype, everyone around him is drawn against type in some way. Rounding out Stern’s visual appeal is the combined work in colors done by Julien Maffre & Laure Durandelle. They’ve captured the dusty, washed out, sun-baked look of the typical Western frontier city… pretty much the only thing in this book that’s been done to type.

Having read Stern volumes 1 & 2, I can honestly say that while the stories were nothing at all what I was expecting, they were outstanding reads that I couldn’t stop reading once I’d started. The humor is dry and understated, the action is sudden and frenetic. I recommend these books from Europe Comics, wholeheartedly, for anyone looking to read a little “slice of life” with an oddball twist. 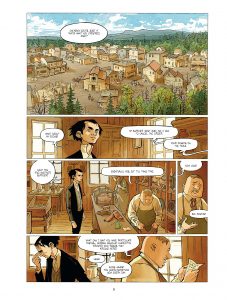 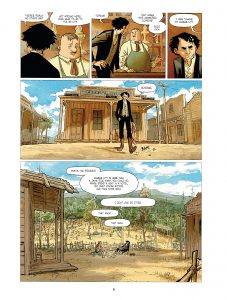 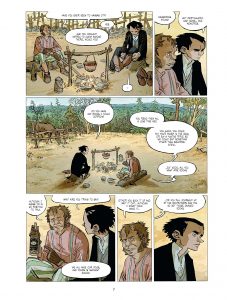