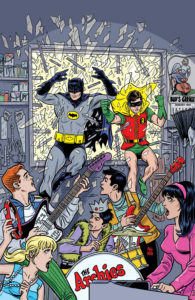 Two iconic comic book characters meet up for the first time in this historic crossover mini-series! A battle in Gotham City extends its reach into Riverdale- with Mr. Lodge becoming enemy #1 of the Dynamic Duo! Now it’s up to Veronica to recruit some help and place a call- to the Batcave!
———-

Danger is afoot in Gotham’s Midway Park as the 1966 World’s Science Fair is under attack. Poison Ivy has escaped from Arkham Institute (seriously, they need to get a handle on their security), and is ready to show the world her newest creation- the Winged Snapdragon! It will take the united efforts of Batman, his partner Robin the Boy Wonder, and special guest star Batgirl, to bring Ivy’s brand of botanical chaos to justice.

Meanwhile, the Penguin, Catwoman, Joker, & the Riddler meet to discuss a new approach for their nefarious plans. For years, their goals have been to rule in Gotham City. No idea, really, of what comes after that, but it’s always good to have goals. The fatal flaw has always been that Gotham has a team of protectors ready, willing, and able to defend the city and its populace. In a stunning epiphany, the Penguin (“Waak waak waaak”) posits a new strategy. If all of the good guys are hanging out in Gotham, why not go somewhere else? Somewhere they aren’t? Somewhere like…

The crossover event is nothing new to comics, a publishing stunt nearly as old as comicbooks themselves. While not all crossovers are created equal, readers will flock to their local comicbook shops seeking answers to the question: “What if ____ met ____?” We know it’s a ploy to boost sales, but we just can’t help ourselves… Case in point, I recently wrote a review for Black Lightning/Hong Kong Phooey, a title that should not have worked- at all. I don’t know who thought it up, but it was awesome almost beyond the telling of it.

Some crossovers are a natural fit… almost inevitable. Such is the nostalgic opus that is Archie Meets Batman ’66. With the rebirth of Archie’s line of books, morphed well beyond its fairly limited roots and crossing over into multiple genres (have you read the one where Jughead’s a werewolf and Veronica’s a hunter?), and the runaway success of Batman ’66, paying respects to the television show that brought Batman and company to campy life, it was only a matter of time. If there were ever two titles destined to meet, it had to be these.

Jeff Parker & Michael Moreci have recreated the Riverdale of old, all golly-gee wholesome innocence. No CW attitude here, kids, but a faithful recreation of your parents’ Archie Comics in every way conceivable. The beauty of their story is that it makes sense. Heck, even as a kid watching Batman on TV I wondered why all the villains never left Batman and Gotham City behind for easier pickings. Logic and common sense would demand that they look for greener pastures, and the idyllic town of Riverdale is just about as green- and pretty much unprotected- as it gets. The nice thing is that Parker and Moreci haven’t totally stayed true to their source material. The writing is a little sharper, walking the line between retro and dated with near-perfect balance.

Possibly more impressive is the work put in by the artistic team of Dan Parent, J. Bone, Kelly Fitzpatrick & Jack Morelli. While the worlds have yet to fully collide, it’s kinda cool to see that Parent has essentially recreated the look of both old Riverdale, and the Batman TV series- toonified for comics but still completely recognizable. He’s even managed to work in the Joker’s kinda creepy, makeup caked over but not quite hidden mustache (the only thing I did miss in the layouts was the classic camera tilt when we were inside the villains’ lair). Solidifying Parent’s work, J. Bone’s inks keep everything crisp and clean (no caffeine), as is fitting for the settings. Fitzpatrick’s colors are exactly as they should be, all bright and primary, and not a dark shadow to be found for lurking or brooding. I can’t really say much about Morelli’s letters, because they’ve done exactly what they’re supposed to by presenting the dialogue and text boxes without getting in the way of or drawing too much attention away from the pictures- in many cases the mark of a good letterer is that their work goes almost unnoticed, and so I do my best to notice it for you. 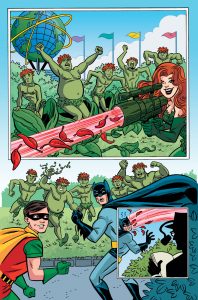 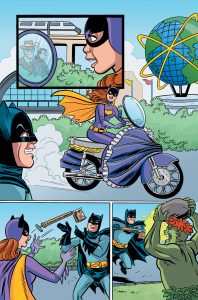 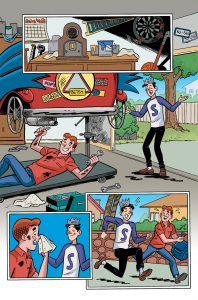 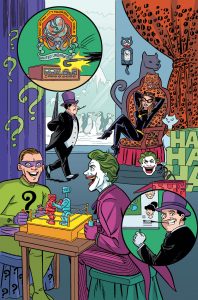 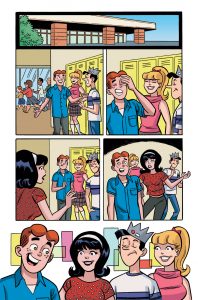 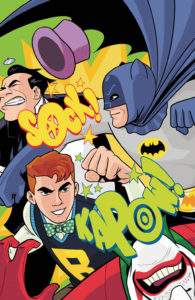 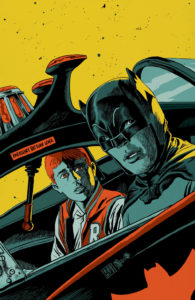 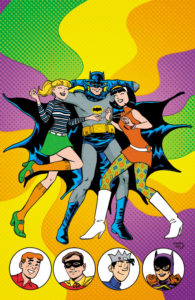 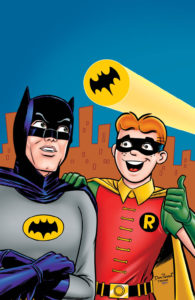 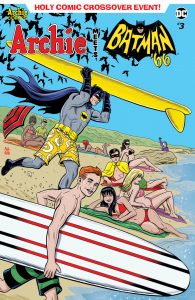 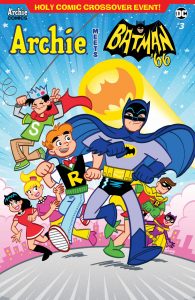 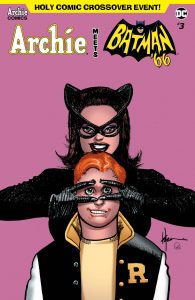 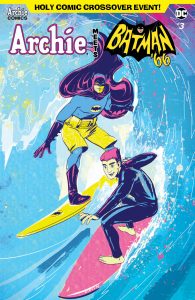 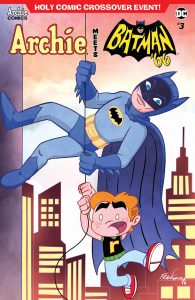 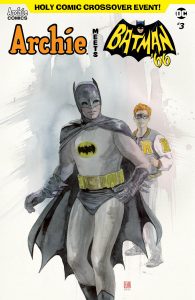