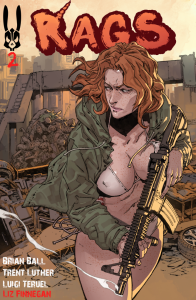 Continuing on with her story, Regina finds shelter with a group of survivors laying low inside of a Super-Store. After an initial encounter with another survivor, Regina finds herself remembering the incident that initiated her PTSD.
———-

Regina Ragowski- “Rags” to friends and fellow Marines- has yet to find much even remotely welcoming, but she’s had sort of a rough patch. Discharged from the Marine Corps under “less than honorable conditions”, Regina finds herself stuck in the middle of a zombie outbreak with nothing but freckles and some pretty impressive ink to call her own. Also, memories… Rags has memories to spare, many of which she’d much rather live without. Memories of her time in Fallujah, Iraq echo in her dreams as she relives the things most only experience through the safety of a movie screen. More recently, she has the guilt-ridden memory of her last argument with fiancé Sean, her last words “I wish you were dead” having just left her mouth before he was swarmed by flesh eating zombies.

All of this would be enough for the average person, but through a series of very unfortunate events Rags finds herself facing the apocalypse without a stitch of clothing on. Nekkid as a jaybird. She’s on the prowl for something… anything… to wear. A comfortable pair of pants would be great, but in all likelihood something in the realm of an adult-sized onesie would even be welcomed. Her search brings Rags to the Paso Robles “Balmart” shopping center, where she’ll find… nah, we’re not gonna give any more away than that.

On to the review… take a deep breath, cuz I go into a bit of a ramble.

Several times, I’ve been scrolling through social media and found someone taking the obvious and easy “moral high ground”, condemning Rags for its use of the scantily clad Regina on the cover of issues 1 & 2. Maybe you missed it, but yes, Regina is in fact relegated to a blush worthy state of undress on the covers. In fact, she’s nude to nearly nude through most of the series so far. Now I’m not going to waste everyone’s time by defending the creative choices here, but I will ask that you consider this: if the zombie apocalypse were to happen, and it seemed to be starting out in Southern California, what do you suppose the chances are that someone is going to be caught in the middle of it all wearing nothing but a bathing suit? Now ask yourself how long that bathing suit would last during the ensuing running, climbing, fighting, and running (lotta running during the zombie apocalypse).

I do, however, have my own thoughts on Rags’s clothing dilemma (Dammit, I guess I am going to waste everyone’s time justifying… sorry). I’ve seen enough creator commentary, and recognized the hints both subtle and non, to see that the underlying story of the title has very little to do with zombies. The zombies are just the backdrop, and fans of The Walking Dead should be able to relate to that concept very easily. The focus of this series is Regina’s chaotic mental state. Her military service didn’t end well, a set of circumstances we’re starting to pick up on through flashbacks. Her engagement didn’t end well either, as anyone who’s read the first issue can attest… and if you haven’t read the first issue, what the hell are you reading a review for the second for? Finally, her more recent situation hasn’t exactly been leaning in her favor. Readers familiar with PTSD, whether through first or second hand experience, by reading or seeing what’s been portrayed in TV and movies, should be able to recognize that Regina is plagued by survivor’s guilt. Readers may also be able to understand that her feelings of guilt are just scratches on the surface. She’s isolated, her only real support having come from the recently and violently deceased Sean. Most everyone else around Regina is focused on their own survival, with very little time or inclination to get to the root cause beneath her emotional outbursts and hostile behavior.

In short (I know, too late), we come around to my own personal opinion regarding Rags’s nudity. Besides the relatively mundane circumstance of her physical nudity, Regina is exposed and vulnerable in pretty much every way that matters. How she’s dealing with that, besides looking for pants, is where Rags the comicbook really hits the ground running as a series. Scoff if you will, but the use of symbolism in the book is pretty much on point, and speaks to some degree of firsthand experience with what military veterans are forced to deal with when there’s no longer a mission to focus on. Rags does it through the visual and often violent medium of the comicbook. The zombies are just the icing.

So there’s my pop-psychology spin on Rags, for which the creative efforts of Brian Ball and Trent Luther should get a deserved round of applause. Now let’s talk about the art. Comicbooks are a fantastic storytelling device, as they’re able to engage the imagination through use of some pretty fantastic situations. They’re able to make those situations a little more “real” to the reader be use of their visual component. In that regard, I can’t really say enough about the work put out by artist Luigi Teruel, but I’m gonna give it a shot. His style is probably more realistic than most, given the positions he uses and a pretty solid grasp of body mechanics. What I mean by that is Teruel doesn’t just pose Regina’s nude form for the obvious effect, using none of the uncomfortably thrust hips or jutting bosom common all too comics. As she’s going through her paces, doing her best to avoid the notice of the zombies and running like hell when that fails, she’s often placed in very awkward poses… the kinds of poses you might see in someone actually running for her life. Even better, at one point in the comic Regina is handed a rifle to fend off an attacking horde and Teruel shows her demonstrating some pretty solid form: cheek to stock, elbows down, sighting down the barrel as she uses her tactical training and experience to good effect (“happiness is a headshot”).

Here’s another thing I think I’ve picked up on in this second issue: The use of color tells another part of Regina’s story. Before you scoff, “what color, you dolt? It’s almost all in black and white” I think we should look at where the colors by Capucine Drapala are used. Regina’s tattoos- in many cases a very important part of a tattoo enthusiast’s identity, and certainly the case for a Marine with an Eagle, Globe, & Anchor backed by the American flag- were the first points that I noticed back in the series prologue issue. Regina’s hair and freckles, of course- talk to a ginger and many will say that it’s part of who they feel that they are. More importantly, in the second issue I was able to put my finger on what I believe to be a great use of color as Regina was given more interaction with other survivors. When she first meets a person, that individual is in black and white, just another part of the chromatically challenged background. As that person does something to change Regina’s perception of them, lending aid when they didn’t have to or generally just being a decent human being, color is introduced in that character. I think that in these cases, color is being used to indicate that which Regina has latched onto as a “lifeline”, whether that be as a potential friend or ally, or something (Riley Hawkins’s red jacket in the first issue) that might hold off the chaos around her for just a little while. I may be totally off base with that, but if reading is a subjective exercise where the reader is able to take an element into their own context, to personalize the experience of reading, then I’m claiming this as my truth. Feel free to do what you want.

Overall, I’m of the personal opinion that Rags is an important comic. First off, the series started out in life as a fully independent title, with all of the work done in the midst of the creators’ “day jobs”. Secondly, it’s an outstanding example of the kind of quality work, both in writing and art, which can come from indie publishers. Finally, Rags should stand up as an example of how the medium can be used to put a spotlight on an issue and hopefully bring attention to it while remaining entertaining. As a military veteran (Semper Fi, Cpl Ragowski), it’s refreshing to see PTSD handled in a way that neither plays its sufferer up as some kind of silently troubled saint, nor reduces them to the role of mad dog killer. Regina’s got problems, and she’s not always particularly easy to deal with, but she’s not a gibbering lunatic either.

And by all accounts so far, when the shit hits the fan, you’re gonna want her at your side with a semi-automatic in her hands. 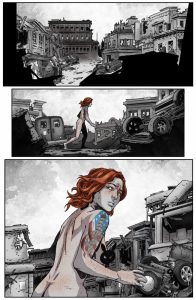 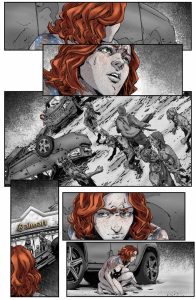 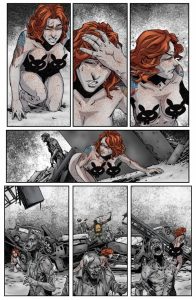