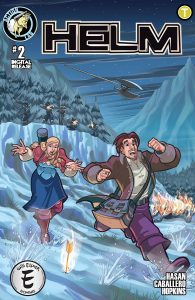 Eldrick’s latent powers are revealed! Thrust into a seemingly inescapable predicament, Eldrick and Gwyn scramble to conceal his abilities. Meanwhile, Luna moves to intercept her target — the boy who bears the Spellsword blood — while a magi-hunting Helmar closes in on her.
———-

On a cold winter evening, on a train bound for destiny- or even Plumbroke Station- random acquaintances become allies. So it is when Eldrick Spellsong, as unassuming a young man as has ever been burdened with the mangle of the Chosen Something or Other, meets the idealistic Gwyn. The two are very different, Gwyn questioning everything in a search for Truth while Eldrick is more than happy to take the world as it’s presented to him. As so often happens in stories much like this one, the hands of Fate have their own ideas when it comes to choosing its agents of change.

I’m gonna have to come clean here, before we get too far ahead of ourselves. I missed the first issue of Helm, but on reading this second instalment I was struck by how familiar it felt. Stories like Star Wars, Lord of the Rings, Willow, and (going deep) The Last Star Fighter… full of plucky “Everyman” heroes who seem to be totally oblivious to their own worth until Destiny pulls them out of the crowd for great deeds. Lest you take my observation as a negative statement, I’ll point out that there’s a reason these stories are told over and over again.

Wherever you are, right now as you’re reading this article, see if you can pick out the stalwart heroes in the crowd. Have a good long look around. Did you find him or her? In all likelihood, you didn’t. The reason for that is pretty simple math… there are just more normal, average, everyday folk walking around at any given time. Stories that take those ordinary people and drop them into extraordinary situations hit most of us right in the “hey, that could be me!” Most of us will see more of ourselves in characters like Luke, Frodo than we might find in the Aragorns of the world.

Jehanzeb Hasan has got to be aware of this foible of the human condition, as he’s presented his readers with two very relatable characters in Eldrick and Gwyn. In the former we have a slightly less than confident young lad, occasionally prone to nervous babbles. In the latter can be found a driven young woman, born into the upper class and eager to discover the Truths often hidden behind the curtain drawn over history. Hasan’s story follows the kind of path one might see along the rapids of a fast-flowing river, as Eldrick and Gwyn are plucked off of their course and thrown into events that are churning into a pretty chaotic mess… with or without their consent.

The artwork of Mauricio Caballero is colorful and dynamic, and would fit very well among the work of any Disney animation studio. The character designs all have that slightly cartoonish quality that I’ve come to expect and admire from many of the titles coming out of Action Labs. Caballero’s action moves across the page at a pretty good clip. As this is a story that looks to be embracing elements of fantasy and steampunk, I was pretty impressed with the way he’s captured magical effects and combat.

Helm is a pretty family friendly story that moves along at a brisk pace. Impressive last name notwithstanding, Eldrick Spellsong doesn’t seem to have been given a higher place than Gwyn, the two sharing an equal footing as their story unfolds. Readers looking for a sweeping fantasy adventure that catches its main characters up in the world’s greater events, maybe also looking for something to share with a youngster or two, could do worse. 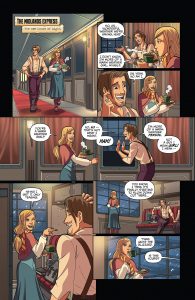 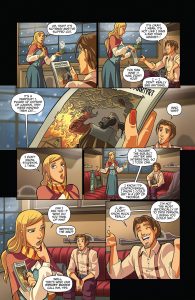 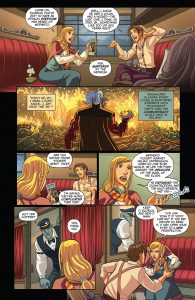