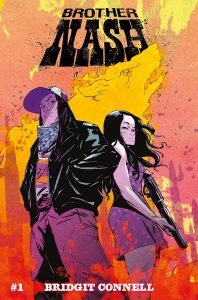 Nash is a haunted trucker who can see ghosts, can talk with spirits, senses evil, and hides a dark secret…

When Nash takes on a mysterious hitchhiker heading for Tucson, he and his friends are dragged head first into his biggest and most dangerous adventure yet.

Bridgit Connell’s self-published smash comes to Titan in a revamped and re-mastered edition.

“Brother Nash mixes in a Breaker! Breaker! Cast that would fit well with a Jerry Reed soundtrack, like Burt Reynolds’ movies playing late at night before Elvira comes on.” – The Geekverse
———-

Nashoba- Brother Nash to his many friends- lives his life on the open road, a long haul trucker traveling the highways and byways. Known to pick up the occasional hitcher, and take the occasional detour, Nash is an old soul with a knack for getting into and out of trouble. With an appointment to keep in Sacramento, and a stop to make along the way, he finds time for a detour through Tombstone, Arizona to pick up a young fella named Hernando. On his way to Tucson, and with his own agenda, Hernando might not be ready to face what’s in store for him on this particular night. As Nash explains things, when the Moon takes to the sky before the Sun is ready to end the day, the ensuing argument results in strange visions… visitations from other times and places.

I love Urban Fantasy. As a genre, it’s perfectly suited to my mentality… As a species, we of “modern society” think we’re so smart, that we know so much. But do we really know what we think we know? To paraphrase Agent K, at one time we knew that the earth was flat. We knew that the Sun revolved around the earth. In this day and age, we know that there’s no such thing as magic. Urban Fantasy takes that arrogance and smashes it to pieces by reintroducing the denizens of myth and lore into modern times. When it’s done well, it’s a great reflection of what happens when steadfast belief in what is known gets slapped right in the kisser with what is conservatively believed to be the impossible– i.e. the Supernatural.

Brother Nash is one of those stories that’s done very well. Nash, a pretty down to earth and level headed kind of guy, is perfectly comfortable with the Old World beliefs of his heritage. He doesn’t concern himself with modern thinking. Things like lines drawn on a map are just man-made conventions that make us feel more secure with our place in the World. But on nights when the smoke of a “Dusk Dream” rises up and the lines between this world and someplace else blur, rigid habits of thought can create all kinds of discord. Best just to chill out, open your eyes to what’s in front of you, and deal with what you’ve got.

Bridgit Connell is creating a world that calls into play an area of the supernatural that has been neglected in the world of Urban Fantasy. By tapping into the mystic world of Native American culture, she’s able to put a fresh spin on the genre. What’s more, she’s populated her world with a group of fully formed, interesting, and- best of all- downright likeable people. The much more than he seems Nashoba is the kind of guy you’d just want to hang out with, maybe throw back a beer or two and swap some stories. Nash’s buddy and fellow trucker, the oh-so-soft-hearted “Brother Ray”, with his penchant for mourning every case of roadkill and naming his new praying mantis friend Bubbadude, is the Big Lebowski of the open road. Likewise, the denizens of “Slim’s Cantina” all have a backstory, a history of their own, that makes them all come across as real people on the page.

As an artist, Connell has an interesting style that catches the personality of each of her subjects, and uses differing shades of purple and blue to highlight where or when her two worlds- our sharply defined world of “the real”, and the less distinct world of spirit & shadow- overlap. The overall effect is one that lets a reader discover where the borders begin to blur, rather than slapping an arrow on the page shouting out “Yo! Weird stuff here!” My hat is off to Bridgit Connell for pulling double duty on Brother Nash as both the writer and the artist. She’s handling all the heavy lifting by herself, and doing a great job of it.

Personally, I’m a little sad to see the “issue 1 of 3” qualifier on this book. Even though the first issue came in at a triple-sized 70 or so pages, the idea that there are only going to be two more of these books is a bit of a bummer. This is a world I’d like to see a lot more of.

I guess, if the spirits will it, who are we to argue… one way or the other. 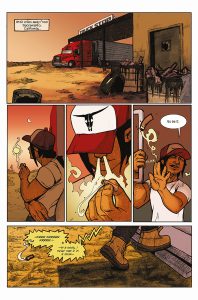 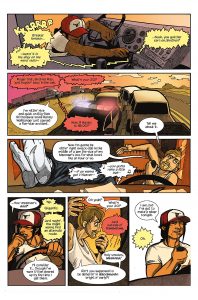 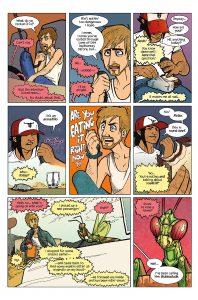