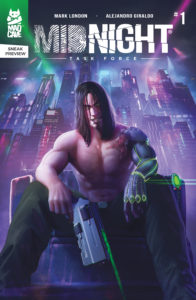 In the year 2055, Detroit is a nightmarish city in need of salvation. A series of brutal murders have taken place and schizophrenic Det. Aiden McCormick has 72 hours to solve the case. Will Aiden be able to catch the killer and maintain his grip on reality?
———-

Major Aiden McCormick led his Midnight Task Force on the kinds of missions you might’ve seen while playing Modern Warfare or Ghost Recon. They were the best of the best, operators at the peak of their very selective profession. Team members Keenan, Cabot, and Pullman followed McCormick, trusting in his tactical genius and analytical thinking to get them past any obstacle. For Mccormick, there was no problem that couldn’t be systematically picked apart, catalogued, and resolved through the careful application of force.

The reality of covert operations is that there comes a time when the variables get to be a little too numerous, and the angles of attack become unpredictable even for a genius at the top of his game. When an IED (Improvised Explosive Device) leaves him critically wounded and his team dead, all Aiden can do is pick up whatever pieces he can and push forward. Now a detective with Detroit P.D., he’s on the hunt for a serial killer with a penchant for plucking the eyes from his victims and leaving his crime scenes covered in shrapnel and explosive residue. It’s a case that will, hopefully, allow him to come to terms with the ghosts of his past.

The re-release of Midnight Task Force takes a step back in its narrative to give a little more insight into the events that led Aiden McCormick from the life of a Special Operations major, to a career as a detective with the Detroit Police Department. Detroit in 2055, where this story takes place, isn’t so different from what we see in the headlines of your daily news source of choice (do people still read actual papers?). For a cop, that means that there’s always something to do, always a crime to be prevented, stopped, or investigated. For someone like Aiden, whose mind is always working, always analyzing, digging away at the dirt on the surface to find the answers underneath, it means that he’ll always have a task to keep him focused. The mission, regardless of where it is or what shape it comes in, always comes first.

The difference now is that Aiden’s resources are a little more limited. Instead of a military machine behind him and fellow soldiers beside him, he’s making due with what Detroit P.D. can provide. One might be inclined to think that his new situation could hamper Aiden in his work, but one thing that hasn’t changed is that Aiden still has a team watching his flank, lending him insight based on their individual areas of expertise: behavioral science, mechanical engineering, close quarters combat- the specialties of his former unit, the Midnight Task Force. The big difference now is that Keenan, Cabot, and Pullman are voices in Aiden McCormick’s head, giving their advice and opinions whether he wants it or not.

A while back, I posted a review on the first release of Midnight Task Force. Overall, I liked the book and thought that was taking an interesting direction. With the re-release, brought about by Mad Cave’s inclusion in Diamond Select Distribution and Previews World, writer Mark London had the chance to go back and tweak what he felt could have been done better in his cyberpunk thriller. The prologue, looking back at McCormick’s Spec Ops team before they were just voices in his head, gives a little insight into how much has changed since the day of the explosion. As the leader of an elite military unit, Aiden was open and outgoing, the banter among the members of the team providing some insight when we’re given the contrast of McCormick’s interactions with people down the road. He’s abrasive, arrogant, and doing a great job of keeping himself isolated from everyone around him. London has used his first draft as an outline, adding details that put some perspective on Aiden as a flawed- some would say broken- character. It’s also pretty obvious that since the initial launch of Mad Cave Studios, Mark London’s writing has taken some steps forward… something that should play out very well in the coming days as London continues to write for several of the Mad Cave’s titles.

The other thing that’s distinguished Mad Cave Studios as an up and coming indie publisher to watch is in the artists they’ve employed. In Midnight Task Force, Alejandro Giraldo creates a Detroit of the near-future where the neon lights shine a stark relief against the grit of a city in decline. More than anything else, Giraldo’s lighting effects are what stand out in my mind. The cityscape is all neon lights and reflective surfaces, brought to life by the blurred motion of vehicle lights speeding along the streets and highways. Some of the characters might come across as a little stiff on the page, with body positions that are just a little shy of “natural”, but the overall design establishes a great cyberpunk backdrop for the title.

By his own admission in a recent interview with thePullbox, Mark London and Mad Cave Studios took the tough lessons learned from the initial launch of their titles, improving on their overall body of work. The drive and initiative shown by that alone deserves some respect. It’s a huge indication of the still new publisher’s determination to move forward, both in sales (which weren’t all that bad to begin with), and most importantly in the quality of their work.

Midnight Task Force is a gruesome cyberpunk thriller about the hunt for a ruthless serial killer. The themes are dark and not for the sensitive or squeamish, and its protagonist is just about as flawed as any fictional character you can think of. Readers should be easily able to identify elements reminiscent of works ranging from Blade Runner to Sherlock Holmes. 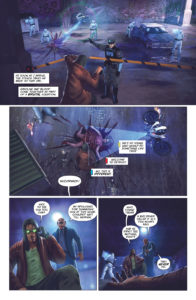 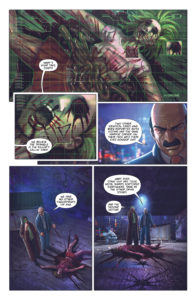 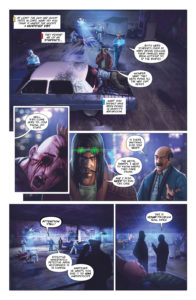 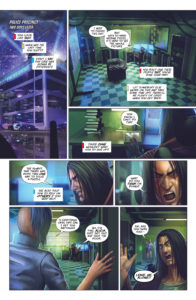 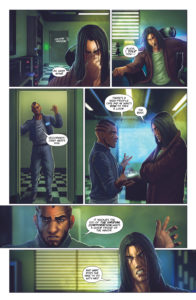 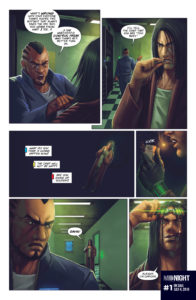