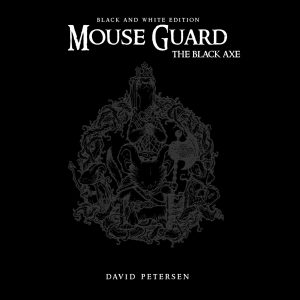 This prequel set in 1115, fulfils the promise the wise oldfur Celanawe made to tell Lieam of the day his paw first touched the Black Axe. The arrival of distant kin takes Celanawe on an adventure that will carry him across the sea to uncharted waters and lands all while unraveling the legend of Farrer, the blacksmith who forged the mythic axe.

Hand-numbered and signed by David Petersen, with a limited print run featuring a slipcase and felt cover, Mouse Guard: The Black Axe Black and White Edition is an experience to be treasured and pored over by collectors and art enthusiasts alike.
———-

Fans of the Mouse Guard series, rejoice! David Petersen has gone back into his fantasy world to explore a little more, a little deeper, to get further acquainted with a younger version of his character, Celanawe (pronounced “Khel-en-awe”). Late in the spring of 1115, the hero is joined by elder mouse Em, all the way from distant Appleloft, charged with a quest to find a weapon of great renown, the mythic and ill-fated Black Axe. To see her task through to the end, Em carries with her a letter granting her the full authority of Matriarch Bronwyn. It’s that letter of authority, addressed to Celanawe and signed “with love”, that ensures the brave young Mouse Guard’s participation in Em’s mission.

I have to confess, The Black Axe served as my introduction to Dave Petersen’s world of the Mouse Guard, and now that I’ve started down the road I’m not so sure I’m going to be able to stop. I don’t generally get too wrapped up in your average anthropomorphic mouse adventure, but the level of detail that’s gone into this one makes it the exception. Not to be at all mixed up with the tone or style of Squarriors from 1First Comics, with its near photo-realism and ultra-violent “Game of Thrones” attitude, Mouse Guard is high fantasy at its epic best.

For this special edition, David Petersen’s work is presented in pretty much the same format in which he submitted it for publication. The 12”x12” hardcover, signed and numbered by Petersen himself, matches the scale of artist’s original inked prints, giving us the chance to look at the black and white pages with the same level of detail he did. Whether the reader looks at the pages with an artist’s eye, or gets immersed in the story itself, there should be no doubt that this is a collector’s edition worthy of any serious collector’s bookshelf.

For those who come into this book unfamiliar with Petersen’s carefully crafted world, let me tell you that you’ll be hard pressed to find a more detailed example of world-building anywhere. From the port city of Sumac, built into and on top of a Cliffside covered in the plant from which it takes its name, to uncharted lands across the Northern Sea, Petersen’s artistic hand has created a fully realized world. By his own admission in the book’s forward, he took this opportunity to really push himself to add layers of detail to this story, a prequel to his previous Mouse Guard saga. The attention to detail in the artwork is outstanding, and if there is a colored version of this book anywhere, I’m not so sure I want to see it. The lines are clean and sharp, offering an unobstructed view that I think might be cluttered by the addition of color.

Without words, the epic of the Black Axe would just be a book filled with- admittedly- pretty pictures. Much of the scope that lies behind this story would be lost to the sight of cute little mice scampering across the pages. Sure, that might be fine for some, but like I said: this is an epic fantasy. The history behind this one story, let alone the entire Mouse Guard saga that came before it, is impressive. Fans of Celanawe’s adventures will get the chance to travel back to a time when he was a warrior in his prime, as well as gain a little insight into his lineage. As a protagonist, Celanawe is both cunning and brave, yet humble in the face of the unknown world ahead of him. Em, for her part, plays her role very well. She carries herself with all of the authority granted her by the written edict of Celanawe’s beloved Bronwyn. As other characters, supporting but not necessarily “lesser”, come in and out of Petersen’s narrative, he shows another layer to his creative energy. It’s one thing to create a visual world that features tiny mice as major characters. It’s another to be able to build on those visuals with detailed characters, all with their own histories and motivations.

I have every intention of digging more deeply into Petersen’s world of the Mouse Guard, having finally come to my senses enough to give The Black Axe a read. It sits at the opposite of the spectrum from the aforementioned Squarriors, taking a more Tolkien-esque approach to its animal kingdom. The action is quick and full of swashbuckling mayhem, and while some of the scenes might be a little dark for very young readers, it should be well within the comfort zone of readers in the double digits. 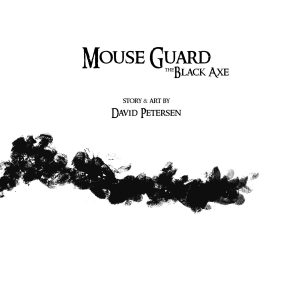 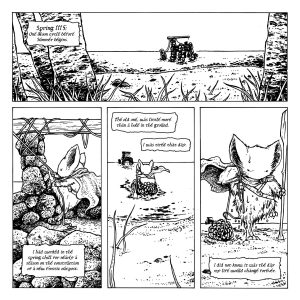 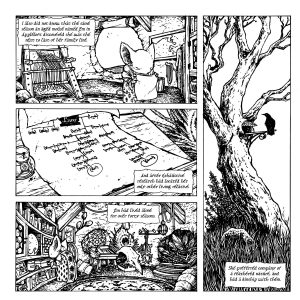 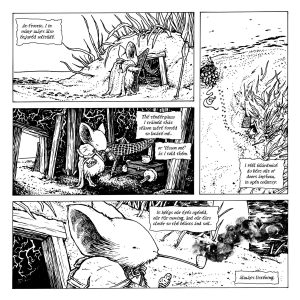 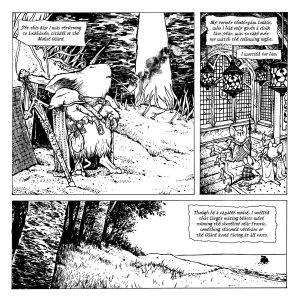 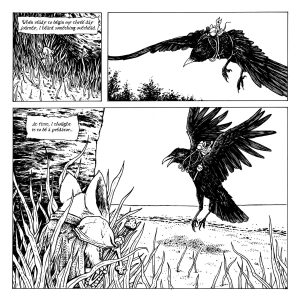 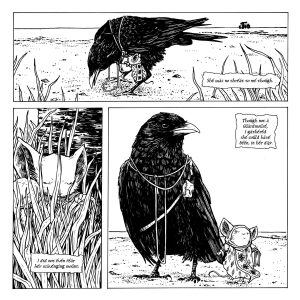 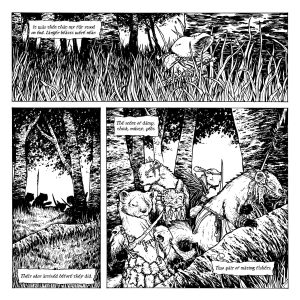 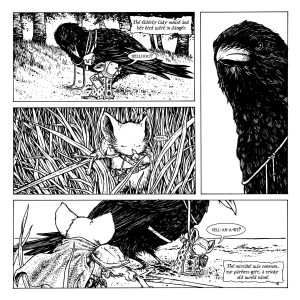 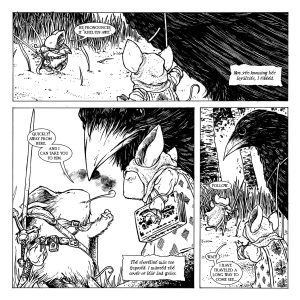 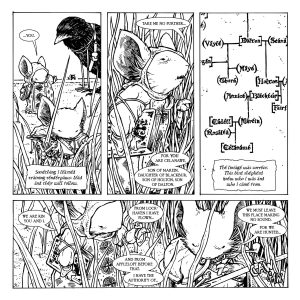