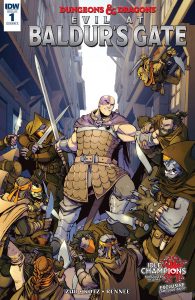 Minsc the Mighty—Evil Beware! The Baldur’s Gate heroes return to the city at last, but their time adventuring in Ravenloft and the frozen northern reaches of the Realms has changed them. Each of them must face great trials ahead before they’ll be ready to embrace their destiny.
A new hero of the people roams the streets of Baldur’s Gate, and Minsc feels left behind despite his own legend. Can he reclaim his place as the city’s Beloved Ranger? Whatever happens, evil is going to get its butt kicked most thoroughly!
———-

When the mighty Minsc and his band of stalwart companions, valliant warriors and giant slayers all, come back to the city of Baldur’s Gate, it’s under less than glorious circumstances. Heroes they may be in other parts of the world but here they’re wanted outlaws, and as such, skulking and hiding- also griping and complaining about said skulking and hiding- will be called for. When Minsc is left alone in their hideout, his companions having personal affairs to be seen to- and maybe to get away from his constant babble about deeds of daring do- it’s only a matter of time before the mighty hero and his fearless animal companion Boo the hamster take to the streets. There are bound to be evil doers afoot, hatching their nefarious plans, and Minsc is of a mind to serve up some Justice.

Fans of either the Baldur’s Gate video game series or the Dungeons & Dragons roleplaying game have got to be loving life lately. With such luminaries as Vin Diesel and Joe Mangoliano (sp?) coming out of the closet as long-time rpg players, and D&D’s current trendiness thanks in no small part to podcasts like Critical Role and Drunkards & Dragons, it’s almost cool to be a gaming nerd. Adding to the rising popularity of the long-standing game of Dungeon’s & Dragons is this title from IDW Publishing and Wizards of the Coast, set in the popular city/video game setting of Baldur’s Gate.

One thing readers won’t have to worry about, at least as far as the first issue is concerned, is the material being on the heavy side. Jim Zub has taken a step back from the more serious writing style of his Wayward series (Image Comics) and fallen back to the tongue in cheek humor of Skullkickers (also Image, a very personal favorite of mine). The opening issue focusses on the oh-so-very heroic (just ask him, he’ll tell ya) figure of Minsc the Ranger. With lines such as “Kicking Evil in its bulging behind with our Swift Boots of Justice!” Zub sets the tone and has me wondering if Minsc might not be some long forgotten ancestor of the Tick. That thought gains a footing in my mind when Minsc runs across rival kicker of Evil Arse, Krigar the Courageous. It all descends into glorious madcap violence after that, and no furniture will be spared the Wrath of the Righteous!

Keeping up with Zub’s story is the team of Dean Kotz (art), Stefani Rennee (colors), & Neil Uyetake (letters). Kotz’s artwork seems tailor made for this kind of high octane tale of mischief and mayhem. His heroes are larger than life and built of bulging thews, and his villains are of the skulking, bullying variety… at first. What’s more, once the action starts moving along Kotz brings the violence with relish and maybe a bit of mustard on the side. The combat is well-paced and dynamic, and not overly graphic… although there’s no denying that there may be death and dismemberment going on, just without any overt displays of arterial spray. Stefani Rennee supports Kotz’s style, giving the heroes a slightly brighter color scheme than those around them, and representing the Lower City of Baldur’s Gate in muted, grimy tones. Finally, in lettering Neil Uyetake is to be commended. While text in comics should never get in the way of the visuals or call undue attention to itself, it’s also kinda cool when it can be used to help establish and maintain the flavor of a given book. Uyetake uses his fonts to full effect here.

What remains to be seen is whether or not Zub will hang onto the humorous, almost whacky and zany nature of his opening issue. If it’s the general tone for the title going forward, it might get to be a little thick for some. I did get the impression that the humor was more focused around the Mighty Minsc, and as future issues focus on other members of the group readers could be treated to varying degrees of silly. As a writer, Jim Zub has handled it all with skill, so it’ll be interesting to see how much his characters will be allowed to set the pace. 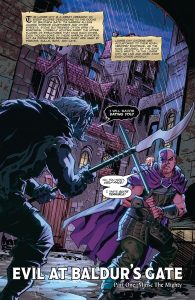 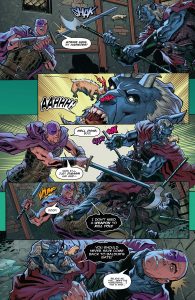 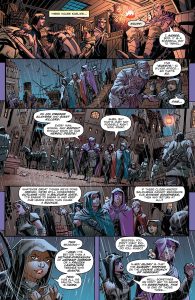