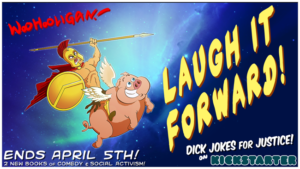 I’m ashamed to say that it took me a bit to follow up on an email I got from Sam, but now that I have, I felt the need to put it out there. Now keeping in mind that my tardiness is seeing this post put out there with only a couple days left on Sam’s Kickstarter project, I think it’s well worth a minute or two of your time to take a look. If you’re wondering if “dick jokes for justice” is a thing that you might be interested in, here’s an excerpt from the WooHooligans Manifesto:

We should be. Laughter is a moral imperative: a proposition declaring a certain action necessary. Kant argued that not following a moral imperative would be self-defeating and therefore contrary to reason, like trying to improve your mood by reading unmoderated internet comments. You can’t spell “encourage” without “enrage”! If we accept this definition, laughter may be the only moral imperative that’s fun!

We all know the world is full of scary things: natural disasters, flesh-eating viruses, identity theft, fake news, real news, terrorism both foreign and domestic… clowns. With all those real dangers, it’s kind of a miracle anyone makes horror movies. “Hey, I got this movie about an alien parasite that melts people’s faces… I’m gonna stop you right there, you had me at ‘alien parasite’. I need something to take my mind off the president implying nuclear holocaust on Twitter.”

Comedy and comics to change the world? There are definitely worse ideas… And even if the Kickstarter project isn’t for you, no worries. Just hop over to Sam’s page and sign up for his newsletter, read up on his other ramblings and goings on…