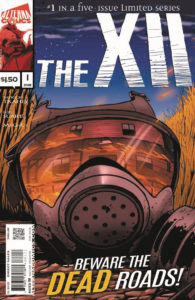 The Sacred City holds the promise of a better life for Caleb and his family. Unfortunately, they’ll have to travel the “Dead Roads” to get there. As winter falls upon them, they traverse the barren wasteland and quickly realize that their safety comes at a price – perhaps the ultimate one.
———-

An unarmed man is pursued by twelve imposing figures. Issuing no threats or taunts, the twelve move without a sound. When their quarry is brought to ground, they surround him, still without a word spoken. The man, wounded and desperate, breaks the silence when he demands they tell him where his family is. Still, the twelve say nothing…

We’re brought back a week in time to find Caleb, the man on the run in the opening pages, instructing his younger children on some of the finer points of farming. He tells them that conserving, using everything they can is essential, that anything wasted or lost can lead to disaster. Caleb, his wife Anna Belle, and their children have been working their land for fifteen years, squeezing everything they can out of the soil. They’re helped by Anna’s brother Alvin- when he’s sober enough to help- and Caleb’s close friend Hank, everyone banded together for safety in a dangerous and unforgiving world.

When a lone traveler shows up, asking for a place to sleep for the night, away from the threats of the open road, the story starts to take shape. Unable to spare any food to a stranger, Anna tells the old wanderer that he can’t stay. With a haunted look in his eyes he begs her to reconsider. The old man talks about dangers that shouldn’t be faced alone… he tells Caleb and his family that the Twelve are out there, vengeful ghosts moving in total silence and waiting to close in on the unwary.

The XII is the latest offering from Alterna Comics, and at first look it isn’t obvious what kind of story is being told. With no time frame given, it could very well be a story of the old frontier, Caleb and family doing their best to tame an unsettled land. But as the opening issue moves forward, new elements provide clues. Glimpses of more modern looking equipment indicate that Caleb and company aren’t living in an “old world”, and references to cities populated by bandits and slavers bring to mind a post-apocalyptic setting.

Patrick Trahey is weaving a slow-burn of a story, dropping future events as a tease of events to come. By introducing Caleb’s pursuit and suggested to capture, then bouncing the reader back one week in time to meet Caleb’s family, we’re forced to go through the introductions with one fact solidly in mind: Where are the children in the beginning of the book? What happened to Caleb and how did he get separated from the rest of the family? It’s kind of a dirty trick when you stop and think about it, and it’s a great move on Trahey’s part. This setup adds an element of horror to his post-apocalyptic world, and takes focus away from what we might expect from the genre (vehicle chases and shoot outs) by using what isn’t said or shown to give us something else to worry about.

Illustrated and colored by Luis Suarez, The XII benefits from its very limited palette. Suarez keeps everything earthy and worn looking by sticking to shades of rusty reds and browns. It gives everything a dusty look, emphasizing the work it takes this family of farmers to squeeze everything they can out of the land. And because Suarez does blend his reds into browns, and back again, it actually took me a few pages to realize this is basically a two-tone book… maybe not starkly black and white, but definitely not full colored. Suarez also does a good job presenting the characters, although it’s a little tough to imagine this group never managing to fill their bellies when you look at size of friend Hank’s physique (for that matter, what’s Alvin using to make his hooch?). Still, the more dynamic character designs and personal quirks make for a more interesting comicbook.

There aren’t any crossbow-carrying road warriors driving modified ATVs across this dusty landscape. The XII is a more subdued, more understated approach to a tried and true genre. As much as I do like the former, the opening issue for this more subtle post-apocalyptic horror story made for a good read. 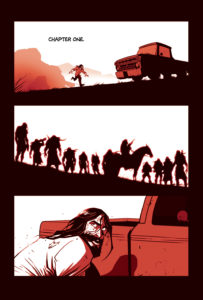 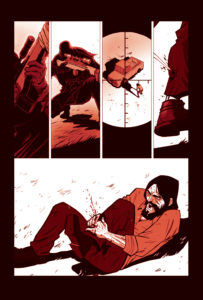 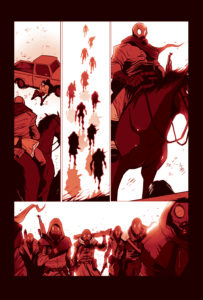