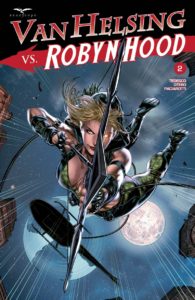 After the events of the last issue, Robyn is infected with a powerful vampire serum that is being tested on human subjects. Now, Liesel must find those responsible for creating the terrifying drug, while she simultaneously looks for a way to cure her best friend before she’s forced to kill her.
———-

The crime boss Von has been busy. Since discovering that vampires are in fact real, he’s had people working on a way to replicate the curse synthetically. Armed with a serum based on samples of vampire blood, Von has created his own blood-thirsty lackeys, thus gaining the attention of both Robyn Hood and Liesel Van Helsing. That could be very bad for Von, but when Robyn gets dosed with the vampire drug things get a little more out of hand than usual.

Robyn Hood and Liesel Van Helsing, two of Zenescope’s flagship titles, have had their share of team ups over the years. In this four issue limited series, they come together a little differently. First, the two are following two separate trails, neither aware of the other’s involvement, but both leading them to Von’s operation. Second, as discerning readers may already be aware, the title of this comic isn’t “Van Helsing AND Robyn Hood”. There’s gonna be a tussle!

Do we fall for it, every damn time? You betcha!

In a story concocted by Zenescope perennials Joe Brusha, Ralph Tedesco, & Dave Franchini, fans are given front row seats to what could be a pretty impressive knockdown, drag out brawl. Everyone likes a team up, but we all know that what we really go for is a good old-fashioned superhero beat down. Keep in mind that this is a four parter, and by the end of the second issue no blows have been thrown but all of the elements are primed and ready.

Ralph Tedesco has a pretty solid handle on the writing duties with these two characters, and I was particularly entertained by Liesel (in all fairness to Robyn, most of her dialogue was limited to snarls and growls by the third page). Tedesco’s dialogue kept a pretty sharp pace, nothing really wasted or unnecessary, most notably during the action sequences. He’s resisted the urge to throw in the too-often obligatory fight dialogue (“Have at you!”) and lets the action play out under its own steam. Where Tedesco’s writing worked very well is in a scene in which Liesel Van Helsing is being interrogated by the dastardly Von. I got the impression that even though she was outnumbered and tied to a chair, she was really the one getting more information out of Von than he was out of her, and that Von had yet to figure out that he was just out of his league. The whole thing had me thinking back to Black Widow’s opening scene in the first Avengers movie, with Liesel delivering taunts and jibes as one of Von’s pet vampires roughs her up.

Fans of Zenescope’s host of titles have no doubt come to expect solid artwork. The team of Allan Otero (art) and Leonardo Paciarotti (colors) shouldn’t disappoint anyone. The action moves across the page as Robyn’s vampiric rampage shifts into gear, and the character designs are sharp and consistent (although Von’s hair does seem to turn from black to brown somewhere between pages three and seven). What I thought worked very well was the way Robyn’s look turns gradually more bestial as the book moves along. Also- and I really mean this, guys- I greatly appreciate the fact that no one felt the need to stick action heroes Robyn and Liesel with completely impractical footwear. Not a ridiculous high heel to be seen.

Robyn Hood has been one of my favorite characters in the Zenescope line up, but after reading through this issue I might have to go back and give Van Helsing a better look. If she’s as hardcore in her own title as she is in this one, she might get bumped up in the standings. Regardless, I’m looking forward to the next instalment of this limited run. The stage has been set, the characters are in place. All that’s left is to sit back, grab the popcorn, and settle in for the rumble.