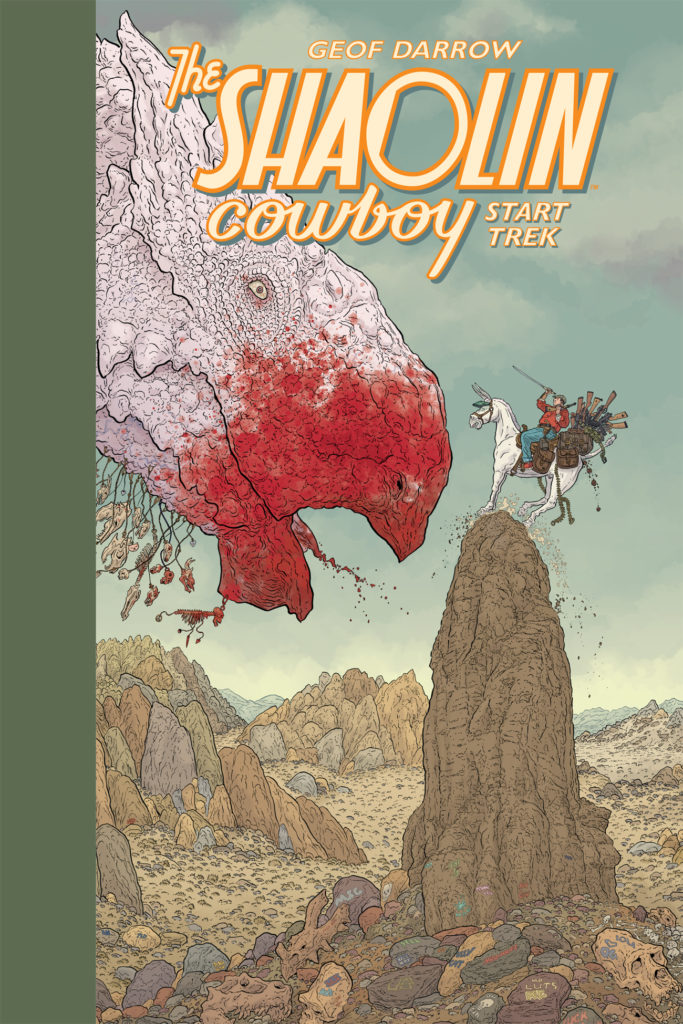 Having won the Inkpot Award, won (and lost) multiple Eisner Awards and created the iconic  and blood-soaked character the Shaolin Cowboy, cartoonist Geof Darrow is one of the most influential and revered cartoonists. As VULTURE says, “no one draws violence quite like Geof Darrow.”  This summer Dark Horse Books will boldly go where they have never gone before when they publish Geof Darrow’s SHAOLIN COWBOY: START TREK and bring a classic, hard-to-find masterpiece back into print. Originally published as a seven issue comic book series by Burlyman Entertainment, the story garnered Darrow the Eisner Award in 2006 for Best Writer/ Artist. The Dark Horse Books edition marks the story’s first ever hardcover publication and features a new cover by Darrow and award-winning colorist Dave Stewart and the complete seven-issue saga written and illustrated by Darrow and colored by Pete Doherty, Alex Wald, and Lovern Kindzierski, as well as classic Shaolin Cowboy illustrations by Moebius (Jean Giraud), Richard Delgado, Mike Mignola, Kevin Nowlan and John Severin.

“My friend Geof Darrow is a comics visionary,” said Dark Horse Comics Publisher Mike Richardson. “He is truly an independent spirit with an outrageous sense of humor and an unparalleled level of craftsmanship. I’m thrilled for Dark Horse to bring this story back into print, alongside the other Shaolin Cowboy hardcover collections, as well as his iconic collaborations with Frank Miller—Hard Boiled and Big Guy and Rusty the Boy Robot—and Lead Poisoning: The Pencil Art of Geof Darrow.”

In SHAOLIN COWBOY: START TREK, the Shaolin Cowboy walks the action-packed path of three enemies. Those from the past, who still pursue him, those from the future who are waiting for him, and those from the present who find killing him isn’t going to be as easy as he looks.

In addition to the chainsaw-fueled adventures of the Shaolin Cowboy, Darrow is renowned for his early work with Moebius, his designs for television (including Super Friends, Richie Rich, and Pac-Man) and films (including The Matrix and Speed Racer), his collaborations with Frank Miller and Andrew Vachss, and his iconic and detailed comic book covers. Darrow originally hails from Cedar Rapids, IA.and now resides in Chicago IL.