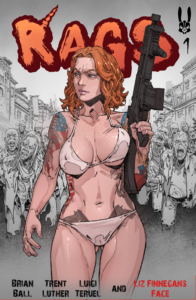 A terrorist attack at the San Ysidro border has unleashed a terrible plague across the state of California. Homeland Security, the police, National Guard, and military have been wrecked as they wrestled to quarantine and control the outbreak. Everything south of Los Angeles has been overrun with the majority of the populace directed to flee north to find safety.

In the town of Paso Robles lies National Guard base, Camp Roberts. An old World War II training base now turned into a refugee camp.

Picking up where the prologue issue (check out the previous review here) left off, Regina “Rags” Ragowski is laid out on her back, blood streaming from her nose, while a band of Paso Robles survivors try to decide what to do with her. Led by Marco, the group had been holed up in a department store as they waited for a horde of zombies to pass them by. When they spotted a naked woman outside (minor continuity break here, Rags started out wearing what looked like a bikini), running for her life and actually drawing more zombies their way, they were understandably reluctant to open their doors.

Being a little more resilient than the average naked person, Rags fought her way around to the back of the store, where she found a door that had been left propped open by Riley Hawkins, one of Marco’s people. Pushing her way through, she met the butt end of a rifle and got knocked flat on her back. Understandably, Rags is less concerned with her bloody nose than in finding something to wear. She’s also a bit snappy- you run naked through a horde of grabby zombies then take a rifle butt to the face and see how sociable you’re feeling- and the “F-bombs” begin to fly.

Let the quest for pants begin.

When I reviewed the prologue issue for Rags: a Zombie Shopping Spree, I made a few leaps of logic. Not all of the information was immediately available, and my assumption was that former Marine Corporal Regina Ragowski had been enjoying a day at the beach when she found herself caught up in the zombie apocalypse- remember in the prologue she was wearing a bikini. I didn’t think it wasn’t a huge leap of faith. Odds are that when the zombies rise up with a case of the munchies, someone is going to be enjoying some time in the sun. Also, California. Pretty sure that’s all they do there. Regardless, it’s all a moot point because as of this first full issue, Rags starts out naked as the day she was born. But after reading the issue I can now say that the real reason for Rags’ unfortunate state of undress is way less mundane than I’d thought. Without going into spoilery details, I will just say that Regina Ragowski had been caught up in the middle of a personal crisis as the more widespread crisis erupted around her.

Yes, there are going to be people who look at Rags and immediately write it off as exploitative. There’s a barely dressed woman holding a serious looking rifle right there on the cover, and she’s naked for a pretty substantial part of the comic. First let me say that in context, the nudity is arguably justified from a storytelling perspective. Again, that justification is going to have to be taken on faith because I don’t want to give out too many details. Another thing I’d like to point out is that anyone dismissing Rags out of hand because of its nudity and/or strong language (WARNING: the word “fuck” abounds throughout the comic, however in every case it has been used correctly in a sentence) is going to be doing the book a disservice. They’re also going to be missing out on an entertaining read that’s more layered than might be immediately apparent.

Creators Brian Ball and Trent Luther came up with the idea for Rags, by their own admission, during a drunken night of video gaming. From there it was a matter of time and effort to bring Regina Ragowski kicking and cussing into the world. With the tagline “Black Humor. Accurate fire. Tactical Onesies” Ball and Luther have made readers a promise, and I’ve seen hints of the first peeking out of this first issue. Accurate fire and tactical onesies have yet to become apparent, but at this point I’m willing to take a few things on faith. Mainly because I’ve been impressed with the writing I’ve seen so far. Rags isn’t just another zombie title, and it isn’t all about showing pretty girls in various stages of undress. Still in its early stages, Ball and Luther have presented a well told story that doesn’t give everything away in one shot. What’s more, they’re willing to give readers the benefit of the doubt, and aren’t spelling every little plot point out. Their story is being allowed to progress without feeling the need to explain or narrate every step along the way. It’s an impressive feat for more experienced writers, so given that Rags is their first outing, Brian Ball and Trent Luther should be congratulated.

On to the art. Holy crap, can that Luigi Teruel draw or what? Rags stands out from the host of other independently published titles, largely due to Teruel’s skill as an artist. His character designs are detailed and distinct, right down to the unfortunate bowl cut being sported by the guy who finally helps Regina to her feet. The action is well done as well, what there is of it on display in this early chapter. Regina is shown to be athletic and dynamic, vaulting over counters as she searches for something to wear. Personally, I’m looking forward to when we’re given the promised “accurate fire”, to see how Teruel handles some more challenging activity. More importantly on a character level, Teruel does a great job showing emotion through body language and facial expression.

Okay, so now we’re going to give our nod to the face behind Regina “Rags” Ragowski. Proud ginger, founding member and queen of the “Gingerarchy”, and supporter of this comic from its onset is the irrepressible, the audacious, the outspoken, Liz Finnegan. Check out her Twitter feed for a bit and it becomes apparent where Rags gets her snark. It’s not every day that a prominent personality on social media consents to having her face immortalized in comicbook form, particularly one that’s going to raise some of the eyebrows that Rags is going to raise. Liz Finnegan, we salute you.

This review has gong on a little longer than what I generally write… I don’t really think it should take you longer to read an article about a comicbook than it would to just read the damn comic, but there is one more thing I’d like to address. While it may not be for everyone, Rags is most notable for shining a light on a topic that’s only recently started to get some meaningful attention. While as of this issue the details haven’t been revealed, we do know that Regina is having problems that have nothing to do with nudity. Among service members, PTSD (Post Traumatic Stress Disorder) isn’t just a slick looking abbreviation for the euphemistically re-branded affliction of Shell Shock or Battle Fatigue. The members of our armed forces have been actively deployed and under combat situations for over a decade and a half, and while the military has taken steps to address PTSD, we all still have a ways to go.

Brian Ball and Trent Luther have done what surprisingly few creators have done, and presented a protagonist who is deeply troubled because of her experiences in active military service. Regina may not be broken, but she is most definitely cracked and has yet to come to terms with the trauma that’s shaped her. She’s flawed. When questioned about her experiences, she goes on the verbal attack. She shuts down and uses sarcastic barbs as a form of defensive avoidance, to evade uncomfortable attention and isolate herself emotionally. Let’s face it, Rags is harsh and abrasive, and really isn’t all that likeable right now. What remains to be seen is how she’s going to be portrayed going forward, if she’s going to be made to deal with her issues as the story plays out.

Like I’ve said before, Rags isn’t going to be for everyone. Some are going to be put off by the nudity or the profanity. Some are just going to look at the cover and say “Pffft, another friggin zombie comic”. I won’t try to convince those people that they’re wrong. I will say that Rags has a lot more than zombies, boobs, and f-bombs going for it.

Check it out. If you think I’m wrong, you can shoot me a message on Twitter and tell me I’m a fucking idiot. I can take it.