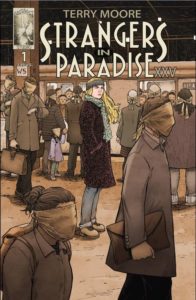 Once upon a time, two school friends named Francine and Katchoo became roommates, talked about relationships, drank, cried and got through life. It was an oddly complicated life and involved the men who loved them, the women who wanted them, and a hooker syndicate who infiltrated crime and government at different levels. In the end, Katchoo and Francine finally admitted that they would do anything for each other, and walked away from their complicated world to love and be loved and become a family. This is the story of Strangers in Paradise, running from 1993-2007.

If you are not familiar with other titles by Terry Moore, you really should look them up. Terry writes the best strong women that comics has ever seen, from Francine and Katchoo in Strangers, to Julie in Echo, to Rachel and friends in Rachel Rising, to Sam and Libby in the just recently completed Motor Girl. Terry writes dimensional women in all shapes, sizes and ages. They are flawed and sometimes ugly, but always very real. The original Strangers in Paradise is what started it all – a funny, sad, grounded soap opera that was the gateway comic for the girlfriends of many fanboys in the 1990’s, and a guilty pleasure for the capes and claws crowd.

This newest edition of Strangers in Paradise doesn’t pick up with our girls immediately – it starts with a guy getting his phone stolen on public transportation. He chases after the kid into a mall where the phone is passed off to a blonde who looks right at him before taking the SIM card out of it and discarding the phone. She looks suspiciously like our Katchoo, in her old Parker Girl role.

For all of you who missed the characters from SIP, you will definitely get a picture of Katchoo and Francine’s home life, along with the background of why Katchoo might be mixed up in petty theft. The entire story just picks up a few years after the last one left off, and while the new reader won’t be familiar with the characters, we are told enough that the story isn’t confusing.

To those of us who miss SIP, it’s like sitting down with a glass of whiskey and an old friend, reminiscing about the old days and catching up. It’s like coming home. Can’t wait to see where the adventure goes from here. 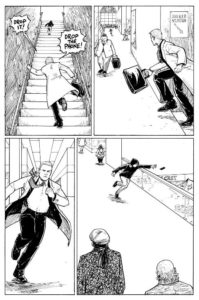 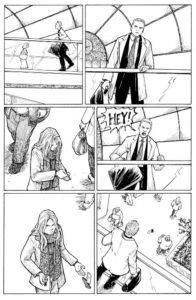