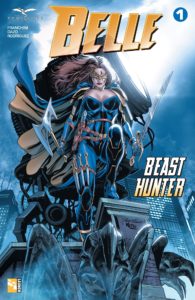 NEW SERIES! NEW HERO! The Grimm Universe is filled with heroes far and wide dealing with threats from vampires, werewolves, corrupt governmental organizations, to ancient orders battling for control of the realms of power. But what lies in the deepest corners of our world could give the evilest creature nightmares. A threat since the beginning of time is rising and only one person will be there to stop it from destroying everything! Working from the shadows a long lineage of warriors have been defending life from the darkness that exists and from that family of soldiers comes the newest ally in the war of monsters, Belle the Beast Hunter! Don’t miss this new series as a new hero is introduced into the Grimm Universe!
———-

This is how our story starts out as Belle introduces herself through inner monologue, and it sets the tone for the rest of this opening issue featuring Zenescope’s latest heroine. Throughout the issue, there are more nods to the Oscar winner from the studio that owns pretty much every hot property there is, but it starts with that one fragment of a sentence. From there, the kicking of asses begins…

Belle is the latest in a long line of monster hunters, generation after generation of the women fighting to protect the world from the beasts that would threaten it. We’re shown flashbacks to Belle’s early days, growing up in a family dedicated to service of one form or another: Dad in the Air Force, and Mom going out on her nightly excursions. Over time her family expanded to include Alex, a young boy rescued by Belle’s mom after his own family was killed, and “Candlestick” (because “Lumierre” would’ve been too obvious), also dedicated to the ongoing fight but acting in more of a support position.

As often happens when there’s a Chosen One who must stand against the darkness (especially in comics and on TV), loss is inevitable. One night, Belle’s mother doesn’t come back from a hunt, and her family unit is shattered. Dad dives headlong into his work for the Air Force and Alex is hit hard by the loss of his second family, leaving Belle with Candlestick and her training to take over the family business.

All of this backstory is relayed in flashbacks, while Belle is on the Hunt. On to the Ass-Kickery!

Belle, Beast Hunter has all the earmarks of a solid action title. The action is dynamic and well rendered by the artistic team of Bong Dazo & Juan Manuel Rodriquez, with character designs that are also in keeping with Zenescope’s ongoing theme of badass fairy tales. Belle’s outfit, as well as her mother’s, are very reminiscent of what fans will remember from her Disney iteration, with a bit of swashbuckling pirate thrown in. The combo is eye-catching, and doesn’t use the ridiculous and too-often seen wardrobe addition of high heels- something I look for in comics and on the screen, and will gripe about every time I catch it. Belle actually looks like she could stand toe to toe with Jack Sparrow himself, and never have to worry about breaking a heel (or an ankle) because of some mistaken belief that running around in stiletto heels is conducive to fighting the forces of evil. Also, keep an eye out for Easter Eggs throughout, as Dazo has seeded little sight gags here and there to remind everyone of where this title’s roots lie.

All of the pretty pictures in the world would amount to half a comicbook, if it weren’t for the work of writer Dave Francini. His dialogue is quick; his banter is humorous without going too far into the realm of silly. Even more important, his characters talk like people. This is one of the toughest things to pull off as a writer, where it can be easy to use overly formal sounding dialogue to convey dramatic tones. Unfortunately, the effect is generally more off-putting than anything else, at least for me, when it doesn’t serve a specific purpose. Readers (again, we can read that as “I”) want to read stories that feature people, not robotic drones. This isn’t the case with Francini’s writing. His characters use contractions and everything, giving their speech a more natural flow rather than coming across as stiff and forced.

Zenescope has taken criticism in the past for being a little one-trickish in their titles. They have a very cool theme, adapting updated fairy tales for more grown-up urban fantasy setting. The problems in the past have often come in a heavy reliance on “cheesecake” and shock value to appeal to an adolescent crowd. Over the last couple years they’ve started to pay more attention to the stories themselves, and put more effort into the writing. Overall, the effect has been a positive one, and I’ve taken it on myself to get the word out to thePullbox’s tens of readers: Zenescope has more going on than just pretty covers- but it does still have those.