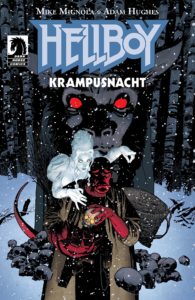 The only thing more exciting than pitting Hellboy against this Satanic spin on Santa is the team-up of Mike Mignola and Adam Hughes.
———-

With the winter in full swing, Hellboy is investigating a disturbance at a small provincial church. Making his way through the snowy forest on the outskirts of a small town, he’s approached by a ghostly woman in white. Her plea is simple and to the point:

As she fades back through the trees, Hellboy pursues. He’s led to a small clearing and finds, abandoned in the snow, a child’s toy. A cottage is visible through the trees, lit from within, an elderly man beckoning to him from the doorway… calling Hellboy by name and inviting him in for dinner. Inside, Hellboy finds a table laid out with a prepared dinner for two. His host, Wilhelm Schulze, is none other than the person responsible for the trouble that brought Hellboy to the small Austrian village in the first place.

First of all, let me just say that this is probably one of the easiest reviews I’ve written for thePullbox. In all reality, I shouldn’t have had to do much more than point out that this comic was written by Mike Mignola, with art by Adam Hughes. Done, moving on to the next book. The thing is, I can’t just read a title like this without spouting off about it.

Mike Mignola, the mind behind the supernatural world of Hellboy and the B.P.R.D., has got to be one of the best storytellers in the business. This is a special holiday one-shot, so there isn’t a lot of time to set up a story or establish much background. No problem for Mignola. Many of Hellboy’s adventures were laid out in much the same way, and the key is in the pace established in the opening pages. Once we understand that Hellboy is investigating- no big stretch, that’s what he does- readers can settle back and let the story tell itself. That’s something Mignola has always done well, starting in the middle of a story and then working his way outward from there as the backstory is established through narrative and visual cues. From there, Mignola seems to let the story have its way, rolling along to its resolution. The fact that all of this is accomplished without panel after panel of seemingly endless dialogue is the biggest reminder of just how good a storyteller Mike Mignola is. With minimal text, he trusts the artwork to tell the rest of the story. Given that many of Hellboy’s early adventures were both drawn and written by Mignola, it really shouldn’t be a big shock that he’s able to write his scripts with the adage “show, don’t tell” in mind. From there, it’s all about finding the artist for the job.

That might be all I need to say, but you got me started and now I’m going to speak my piece.

It’s a given that any time you see that Hughes is behind the art on a title, not limiting his involvement to a cover and a pinup or two, it’s an event. Between you and me, I don’t think anyone else could have gotten me to look at Betty & Veronica (no offense at all to the feats being performed over at Archie Comics- I’m just a Philistine with an appreciation for more action/less teen angst in his comicbooks). Hughes is one of the rare artists able to convey character through expressions and posture, without the need to rely on excessive dialogue to do the job. Without a doubt, that’s the very thing that makes Adam Hughes pairing up with Mike Mignola the most perfect thing for a Hellboy story. Hughes takes Hellboy, as unique a character as you’re likely to find in a comicbook, as different from the heroically human characters filling countless books in all genres, and treats him with the respect that he’s due. He doesn’t just do Hellboy the way Adam Hughes might do Hellboy, but goes to the effort of blending his style in with what Mignola’s established in his world of ghosts and goblins.

I may be wrong, and please feel free to correct in the comments below if I am, but I believe this one-shot title marks the first pairing of Mignola and Hughes. All I can say in closing is that my hope is that it isn’t the last. In fact, I gotta go write a letter to Santa. That’s all I want for Christmas. 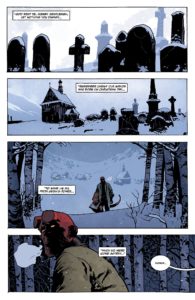 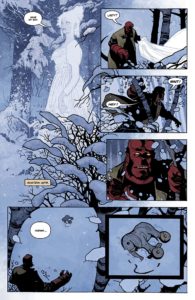 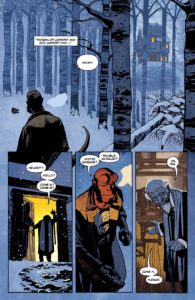 To all of you taking the time to check out a humble little comic review blog like thePullbox, from this humble reader of books and writer of words… Happy Holidays! 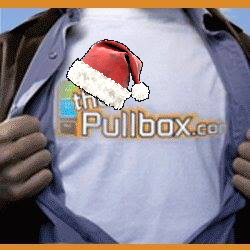