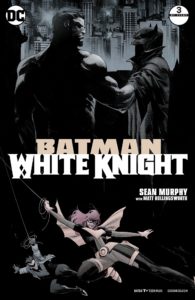 Tragedy strikes, and the Bat-family face the fight of their lives against an army of super-villains and waning public support. A new discovery reinforces Jack’s plot to jeopardize the Dark Knight’s standing in Gotham City, and Harley’s obsession with The Joker reaches a new height—and threatens to change the game for good!
———-

Jack Napier. Harleen Quinzel. Two great minds working together to save Gotham City from its greatest menace… the ruthless vigilante known as Batman.

Napier, free of the Joker’s influence, has become the savior of Gotham’s lost and forgotten, uncovering layer after layer of corruption from on high. It turns out that there’s quite a bit of money to be made by sifting through the rubble left in Batman’s wake and skimming from the city’s “natural disaster relief fund”. Napier has uncovered all the evidence he needs to bring the system to its knees, establishing himself as the hero for the common folk. Meanwhile, all of Batman’s greatest enemies have joined forces in a united strike that once again leaves a trail of destruction as the Dark Knight and company- Batgirl & Nightwing- stand in their way.

I generally like to keep my reviews focused on the independent publishers out there. We at thePullbox figure that DC and company have plenty of exposure and don’t really need the help of a humble little blog like ours. Every once in a while, though, I find a title that stands out, and I just have to make sure our tens of readers hear about it. Such is the case with Batman: White Knight. One of the things that I believe really separates indie publishers from the more mainstream companies is the willingness to take risks and break the status quo. White Knight takes Batman, one of DC’s flagship characters, and turns him inside out. It’s a bold move for DC, to let one of the Trinity receive this kind of near-blasphemous treatment, but the result is a title that should surprise the most jaded fanboys and girls.

The first thing I need to do is put out fair warning: this story is taking place outside of the normal Batman continuity. In it, the Joker has found a wonder drug that cures him of the chaos that is his hallmark, leaving Jack Napier in charge of his faculties. With this new-found clarity, Napier finds the focus the Joker lacked, leaving his genius free to create complex schemes that would baffle a chess master. Apparently, success as a criminal mastermind is all about the follow through, something Jack Napier was sorely lacking as the Joker.

In what I think is a brilliant little bit of retcon, Napier is also reunited with Dr. Harleen Quinzel… the original Harley Quin… who wastes no time in kicking the current imposter to the curb. Fans who remember Harley’s earliest days in Batman: the Animated Series are going to appreciate the story behind this twist, while the crowd more familiar with Harley as featured in the Suicide Squad movie might be a little disappointed. This isn’t the only tip of the hat made to Batman:TAS. I’ve found numerous references to that classic cartoon in the pages of White Knight (my personal favorite so far was a nod to “Almost Got Him”- one of the series’ more popular episodes- back in issue 2).

Pulling double duty as writer and artist, Sean Murphy has created an outstanding story that would fit nicely into DC’s old “Elseworlds” label. He’s blurring the lines between Batman and his most notorious, arguably his most defining villain, leaving seminal sidekicks Nightwing and Batgirl to question their loyalty to a man driven to defeat his enemies at any cost. The impression that I got was that Batman’s focus was more on the fight itself, his goal being to crush anyone who would dare to stand against him, innocent bystanders and collateral damage be damned. Murphy’s approach is perfectly timed, given recent criticism leveled at the destruction of property that usually coincides with battles between heroes and villains. No one’s safe from Murphy’s pen, with normally stalwart Commissioner James Gordon portrayed as tragically co-dependent and ineffective as a leader in law enforcement.

Visually, White Knight is outstanding, with Sean Murphy’s work as an illustrator highlighted by Matt Hollingsworth’s colors. Together, they’ve established a stark looking Gotham city that seems to be more abandoned buildings and rubble than a place that any sane person would want to live. Also, Gotham’s ever evolving cast of characters is handled very well. Many of the character designs seem to have been inspired by the oft-mentioned Animated Series, against which any version of the Dark Knight will inevitably be judged. Not to beat a dead horse, but I love the look of this title.

Batman: White Knight does a great job of presenting familiar characters and situations from a new perspective. Sure, Batman is dedicated to combating crime in Gotham, but the destructive methods he employs with single-minded determination are shown to be as much a danger to the general public as the villains he’s fighting. White Knight also takes the time to establish the almost symbiotic relationship between Batman and the Joker, the pair shown to be two sides of the same coin. As a character study alone this is a great read. The many references/respect paid to the classic Animated Series, and the fresh look at Batman’s obsessive war on crime makes White Knight a must read, liberties taken with continuity be damned. 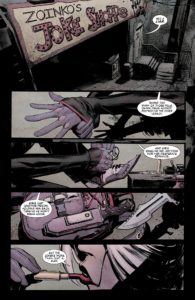 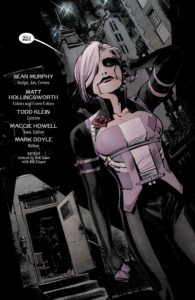 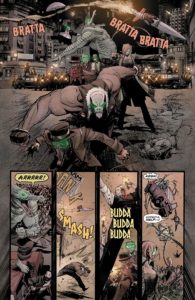