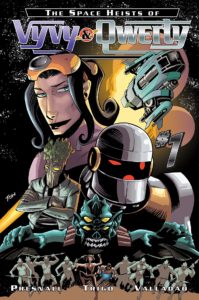 She’s the daughter of smugglers, abandoned and orphaned.

He’s the runaway creation of a cyborg scientist.

Together, they’re the most brash and hyperactive team of thieves in the universe. These are…

The first issue (take a look at the review here…) came into being thanks to a successful Kickstarter campaign. Now, getting ready to roll out a follow up installment with a second campaign, creator/writer Niall Presnall is up to his elbows in promoting the title.

More than just a reviewer, I’m also a backer and I have to say that I was pretty happy with my small investment. Vyvy & Qwerty is a fast-paced sci fi action title, with roots sunk deep into the classics, and I was happy to get the chance to hit Niall up with a few questions.

PullBox:
Okay, the first thing I have to point out is that Vyvy & Qwerty would be right at home among some of the action heroes that I grew up watching and reading. Your opening scene smacked of the first ten minutes of Raiders of the Lost Ark, and I believe I caught more than one Star Wars reference in there. What other influences do you have bouncing around in there that motivated you to put your story to paper?

NIALL:
Well, what motivates me to put the story to paper is the characters. They’re my fun, my escape, and I’ve also come to realize they’re parts of me?

Sorry, I didn’t think this interview was going to be me reflecting all artsy-fartsy, droll drink in hand while looking out the window of a lonely skyscraper, but here we are.

Then after the characters comes the world, and that’s where the pop-culture osmosis starts to seep through? Our protagonists kind of live in this Star Wars-esque science-fantasy adventure world where we can introduce tropes you’re familiar with and put them to use in a way that makes sense for us.

PullBox:
The first issue was a great intro to the universe you’re creating, and a nice look at your feature characters. It’s pretty obvious that you’ve got a lot of history between the two feature characters, and that neither of them is what might be considered the stereotypical protagonist. What can you tell interested parties about Vyvy & Qwerty that might not be immediately apparent, without giving away too much?

NIALL:
Well, Vyvy was abandoned by her parents, so she’s got her fair share of issues. She has trouble trusting, she fears being left behind, fears commitment and deflects with humor and sarcasm a lot. She’s not great at relationships, as we’ll start to see more of after the first arc.

She’s dated her fair share of men, women and aliens, and more than likely we’ll run into at least one of her ex’s at some point.

Qwerty ran away from his cyborg father to avoid repairs that would erase his personality. So while he has issues similar to Vyvy, he mostly just wants to feel acceptance. That is made doubly hard by the fact he’s a robot, who are considered second class citizens in our universe. His need for acceptance for himself and his robot brethren in a universe with no place for them makes him a bit of an activist.

PullBox:
I know that many writer/artist teams have a lot of interaction between them as they’re putting a book together. How much collaboration goes on between you and Carlos Trigo? Do you script your story with an eye to detail, or do you favor leaving things a little more open and then polish the script off once you’ve seen Trigo’s art?

NIALL:
I’m probably controlling to the point of being a nuisance? I think it’s a mix, some things I can be annoyingly specific about, other things, I just give Carlos the bare minimum and let him work.

I script every issue out panel by panel and don’t think I’d be very comfortable writing “Marvel style.” I still have to be able to adapt though. There were a couple times in the first issue where I had split the page up into too many panels, but it didn’t become obvious to me until I saw the layouts. At that point, it was time to cut or combine a panel to get a better page flow.

A lot of the characters are completely designed by Carlos as well. I’ll give him either a brief or no description and he’ll come back with something awesome. The Enkantons from issue one? I told him “reptilian aliens” or something like that, and he drew those mean, four-eyed creatures.

Also, the bartender from issue one. I never told Carlos how to draw him, I just said he was “unruly and hates robots” and Carlos delivered.

I also need to point out that Osmarco Valladão has been essential in developing the visual look and tone of the book and characters. He makes our characters pop and gives the environment tons of depth.

PullBox:
As a reader and gamer, I can appreciate the thought that goes into a “metaplot”, but with new characters it’s always kinda cool to be able to follow along on a bit of a roller coaster ride before we get there. I know some writers have almost the same relationship with their stories, having a decent idea of where they’re going but letting things develop on the fly, almost experiencing the same surprise as the reader as their story unfolds. Do you have a solid outline to follow, or do you like to go where the story takes you and try to hold onto the reins?

NIALL:
I have a basic idea of what I’m doing and where everything is going, in terms of metaplot, but overall I’d say that I’m just on the ride with all of you.

I guess it’s more that I have a basic idea of how I want it to end, and a bunch of stuff I want to do before that.

Who knows how much I’ll actually be able to do, but I can tell you the second arc starts with issue six and is called “Five Heists in Five Nights.”

That’s the future though, let’s get issue two made and go from there.

PullBox:
The first issue is copyrighted under your name, with no publisher attached. What’s your penultimate goal for Vyvy & Qwerty? Do you have your fingers crossed for an ongoing series with an established publisher, or are you more interested in keeping your toys to yourself, sticking with the self-published route?

NIALL:
Ongoing with an established publisher is the dream, but it’s not something I can really expect, being an unknown creator working on their first comic series. What I can do is continue to make it and prove there’s an audience for it.

Who knows? Maybe after the first arc, we’ll have publishers interested in a collected edition.

Pullbox:
What are you most proud of as a creator/writer/all-around dude?

NIALL:
Why would you ask me this incredibly existential question?!

The Space Heists of Vyvy and Qwerty #1 is definitely what I’m most proud of as a creator, because I stopped thinking about something and actually did it.

PullBox:
I know that your creative types have different ways of unloading a bit, when you’re not pouring your sub-conscious out into the medium of your choice. If you were to point out one guilty pleasure (that you’d admit to…), whether it’s a TV show, movie, book, etc., what would it be?

NIALL:
Why should we feel guilty about the things that give us pleasure?

Actually, I take that back, I started playing Destiny 2, and any game with that much loot inevitably makes me feel guilty.

PullBox:
Plug time! What else is there that you’d like the tens of Pullbox readers to know about this (or any other/future/potential projects?

NIALL:
We Kickstart issue two on November 1st! And anyone who pledges $10 or more in the first week will get a free signed print of our Kickstarter exclusive variant cover by Kendall Goode.

Thank you so much for the interview and your continued support! We won’t let you down and definitely didn’t steal anything from you during the course of this conversation. 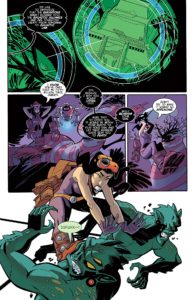 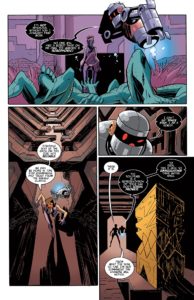 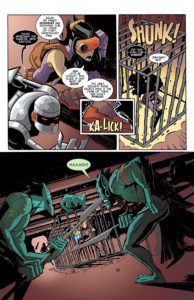